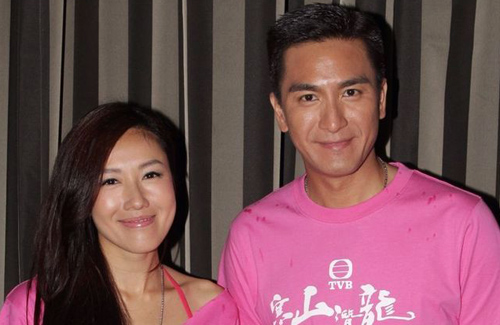 Kenneth Ma (馬國明) and Selena Li (李詩韻) portray a married couple in TVB’s currently broadcast wuxia series, Ghost Dragon of Cold Mountain <寒山潛龍>. In a recent joint interview, Selena laughed at Kenneth for being so attracted to her character that he could not keep his eyes off of her even after cameras stopped rolling. Besides finding Selena’s onscreen character attractive, Kenneth also admitted he has feelings for her in real life.

In Ghost Dragon of Cold Mountain, Selena portrays a pair of identical sisters, Chu To Fa and Yan Mei Leung. Younger sister Chu To Fa is a cheerful, simpleminded, and lovely village girl. She has a strong personality, and is a loyal wife to Kenneth’s character. Meanwhile, elder sister Yan Mei Leung lives a solemn life as a seductive courtesan. Selena revealed that switching between the psyches of the two characters was difficult and almost made her feel schizophrenic.

One of the most memorable scenes during filming was when Selena had to touch Kenneth’s nose. She admitted being a little nervous at the time, but Kenneth displayed no reluctance and proved to be a very cooperative costar. In fact, he seemed excited about the scene, since viewers would be in for a funny surprise. Kenneth added he had hoped to share a kiss with Selena, but she claimed it was unsuitable for a period drama.

Selena Has No Feelings for Kenneth?

Last year, Kenneth and Selena made a deal that they would marry each other in five years if they are still single when the time comes. Asked if the deal is still on, Kenneth replied, “There are still four and a half years to go! I believe our deal continues.” On the other hand, Selena laughed and exclaimed she is nervous and does not know how to respond.

Kenneth complimented Selena for being a wonderful person, and believes it is normal for her to set high expectations for her future boyfriend. Selena denied, “I don’t have any special expectations. The feeling I have is important; I would naturally admire someone with lots of motivation. Of course, he also has to be loyal and loving towards my family and I.”

While Kenneth expressed he has feelings towards Selena and is secretly waiting for their marriage deal to happen, Selena exclaimed the timing is not right and she has no feelings for him yet. Instead, she praised Kenneth for being a great costar and referred to him as a hardworking and filial bachelor.

46 comments to Kenneth Ma Admits Having Feelings For Selena Li