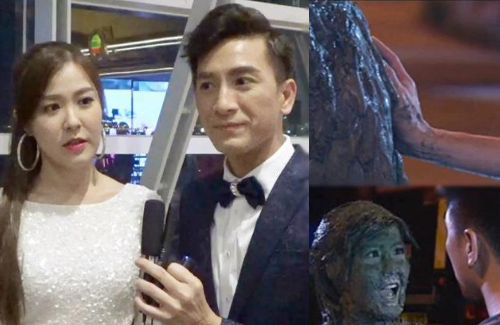 The Exorcist’s Meter <降魔的> costars, Kenneth Ma (馬國明) and Moon Lau (劉佩玥), attended a TVB function and was teased about their chest-grabbing scene in a recent episode. In the scene, Kenneth touched Moon’s chest. In response to his action, Moon slapped Kenneth across the face, reprimanding him for being a creep.

Known for his jokingly flirtatious demeanor, reporters teased whether Kenneth enjoyed filming the scene. The cheeky actor said, “Of course! This is every man’s dream!”

Moon, who stood beside him, clarified, “That’s not the entire truth. At first, Kenneth told me not to add protection padding. But right before we were to start filming the scene, he told me to add the protection padding! He said it’s better if I did. In the end, I ended up using it. But it didn’t really matter, because I wore a thick sweater on the outside. He wouldn’t be able to feel anything anyway!”

Jokes aside, Kenneth praised Moon for her work ethics. “I think Moon is great. She’s very professional. The director told me to just go in for the touch and it would be okay. Actually, there wasn’t much feeling because there were barriers. However, we had several outtakes and had to redo the scenes again from different angles.”

Did Kenneth talk to his girlfriend, Jacqueline Wong (黃心穎) before filming the scene? Kenneth responded, “No, there’s no need. It is understandable when filming. This scene was very successful. Several of my former schoolmates left messages for me. They said, “It would’ve been great if it were me!”