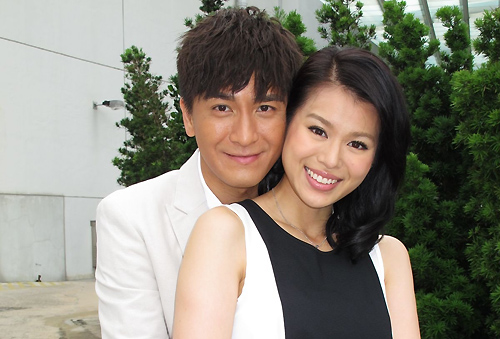 The Hong Kong media has been doggedly attempting to discover the truth behind Boscolie’s surprising breakup. Both Bosco Wong (黃宗澤) and Myolie Wu (胡杏兒) were bombarded with infidelity scandals. Bosco was rumored to have been unfaithful to Myolie while she away working in mainland China. Myolie was rumored to have decided to let go of Bosco after falling in love with her Jin Yu Man Tang <金玉滿堂> costar, Eric Huang (黃少祺). However, both parties came before the media to rebuff their rumors, and Myolie emphasized several times on her Weibo that she is not dating Eric.

Despite Bosco and Myolie’s denials, third party rumors did not stop. Oriental Sunday reported that Kenneth Ma (馬國明) has successfully caught the “middle-aged” Myolie’s heart after working together on the set of Season of Love<戀愛季節>. Pictures of Kenneth and Myolie hugging intimately with each other were also circulating in the Weibo online community.

When Kenneth was interviewed for his alleged pursuit on Myolie, he did not seem affected by the claims. He openly praised Myolie to be a woman with good qualities. Kenneth also joked along and revealed that he had been “pursuing” Myolie since their first collaboration on the set of To Grow with Love<肥田囍事> in 2005!

Kenneth the First to Know About Boscolie’s Breakup?

Oriental Sunday further claimed that Kenneth was the first in the industry to know about Boscolie’s breakup, revealing their close relationship. In early July 2012, when Kenneth and Myolie were attending a three-day promotion event in Singapore, Kenneth caught Myolie talking emotionally through her phone several times. Myolie admitted to Kenneth that she was talking with Bosco; she told Kenneth that they had already broken up.

An insider said, “Kenneth tried to convince Myolie to reconsider, but Myolie was very firm in her decision. She also told him that she was already looking for a new place to move to. That’s when Kenneth decided to make his move!”

The cast and crew of Season of Love were filming on location near the HSBC Main Building in Central on August 5th. The scene had Kenneth running around the building topless and in bright yellow boxers with smiley faces, attempting to attract Myolie’s attention. Unsurprisingly, the scene also attracted many bystanders as well, with people stopping in the middle of the streets staring at Kenneth with their jaws dropped!

After completing the scene, Kenneth shared his thoughts on Boscolie’s breakup with the press. When asked if he felt Myolie was acting any differently after her breakup with Bosco, Kenneth said, “I didn’t feel she was acting any differently on the day [Bosco] gave his radio interview. Myolie was very professional at work. Today as well.” Asking if Kenneth went to comfort her after the breakup, Kenneth exclaimed, “There is no need to! I don’t want to mention it!”

What did Kenneth think of Myolie? Kenneth said, “She is very good! She has plenty of choices ahead of her!” Asked whether she was his type of woman, Kenneth said, “It’s a dangerous time right now! I don’t dare to comment!”

On August 6th, Kenneth and Myolie were filming the final episode for Season of Love. Myolie was  asked about her romantic rumors with Kenneth. She laughed, “I treat them as promotion! He has many fans; I don’t want them to be angry with me!”

As for reports indicating that Myolie is a “middle-aged” woman, Myolie admitted, “Well, that’s true! I don’t think I look like a young, tender girl in any way! But a woman’s charm does not show until she is 30 years old!”

Kenneth jumped in, “Mature women are attractive! I don’t want to go out with a really young girl. It’s like hanging out with my daughter!”

However, Kenneth also denied his rumors with Myolie. He said, “We’ve been filming a lot together recently, so I’m also treating these rumors as promotion! The media is taking really good care of Myolie. They are very quick in helping her find another significant other. Myolie has really good qualities; she doesn’t need to find another one so soon! Many fans really want [Bosco and Myolie] to get back together. I don’t want to be the bad guy here! The pictures [on Weibo] were set photos!”

Asked if Kenneth was furious about tabloids claiming him to like middle-aged women, Kenneth laughed and said, “I’m not upset!”