Why is Kenneth Ma Not Dating Natalie Tong, Rebecca Zhu, or Eliza Sam? 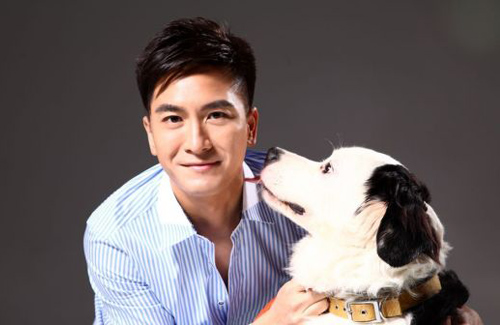 Above: Kenneth Ma in a photo shoot for his new skincare ad.

Last year’s The Hippocratic Crush <On Call 36小時> sent Kenneth Ma’s (馬國明) popularity skyrocketing with his role as Dr. Cheung Yat Kin, in which the audience loved. He not only received the 2012 TVB My Favourite Male Character award, but also the Astro On Demand Best Actor award in Malaysia.

Anticipated sequels to be released this year include Triumph in the Skies 2 <衝上雲霄II> and The Hippocratic Crush 2 <On Call 36小時II>, which will both feature Kenneth. Near the end of the year, he will also be filming for a golden deluxe drama by Wong Jing (王晶).

Allegedly, Kenneth is currently being heavily promoted by TVB in order to take this year’s Best Actor title. Kenneth said, “Actually, it doesn’t matter which award I receive. I wouldn’t mind even if I were competing for Best Supporting Actor. The most important thing is that awards allow me to make more money to purchase a house. I am thankful for the opportunities that the company, as well as Wong Jing, has given me. I will be able to work with Deanie Ip (葉德嫻) and learn from her.”

Kenneth revealed that his goal in 2013 is to earn enough money to purchase a 1,300 square feet flat in the eastern district of Hong Kong Island. He would like to live with his parents so that he can take care of them. At 39 years old, Kenneth is still young at heart and loves to spend time with his family.

In his leisure time, aside from spending time with his family, Kenneth would play soccer or go for his weekly facials. Like most men, Kenneth neglected his skin when he was younger, which resulted in problematic skin. Filming a new photo shoot for his skincare sponsor recently, Kenneth said, “After becoming a skincare endorser, I realized that appearances and image are very important for an artist and public figure. Even if I’m tired, I’ll reveal my best side before others.”

Recently, there have been many rumors regarding Kenneth’s love life. Gossip subjects include his costars, Natalie Tong (唐詩詠), Rebecca Zhu (朱晨麗), and Eliza Sam (岑麗香). Kenneth expressed, “I can’t stand it! I’m most afraid of angering other people’s fans!”

Kenneth drew the line away from his rumored flames. Regarding Natalie, Kenneth said, “She’s a good girl. We’ve known each other for many years. It’s okay to be friends, but it’s a different matter for a girlfriend. I never asked about her relationship with Amigo Chui (崔建邦). You can say that I don’t want problems and will not enter a love triangle. I know Amigo very well.”

On Eliza Sam, Kenneth said, “Princess Heung Heung [Eliza] is very cute, but I don’t know her well. We don’t have much to talk about. We don’t really stay in touch, as I don’t even have her cell phone number. I feel bad for dragging her [into the gossip]; it’s not fair for a girl and made me very embarrassed.”

As for Rebecca Zhu, Kenneth asked audiences to spare her criticisms. “She’s a good girl, a very hard-working newcomer. She will have to go through the phase of being a newcomer. There’s no need for people to criticize her Cantonese and be so harsh on a newcomer! But we don’t have much contact, and haven’t seen each other since the last public event.”

Speaking of looking for a romantic partner, Kenneth said, “You choose others, others choose you. All the girls within the industry are beautiful, and of course beautiful girls have boyfriends. I won’t consider them if they already have a boyfriend. There’s no point in getting involved in a complicated three-way relationship. I never like to compete with others.”

Kenneth further revealed that girls outside the industry show no interest in him, so it depends on fate when it comes to love. One time, his mother tried to introduce him to a girl, but as soon as the girl heard who he is, she said, “Kenneth Ma? He has a different girlfriend in every drama. He will have lots of temptation. No way!”

As long as he has money to earn, Kenneth does not mind the tabloids’ rumors. “I know if there are no rumors, there won’t be a talking point. But I must be rumored with someone who is single, or else it will look bad! The physiognomist told me that instead of gaining pursuers, I will be involved in gossip this year!” Kenneth decided that his plan will be to talk less and work more.

28 comments to Why is Kenneth Ma Not Dating Natalie Tong, Rebecca Zhu, or Eliza Sam?