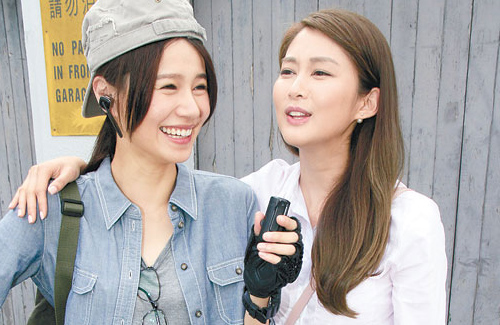 Often teasing each other, Kenneth initially joked about asking the producer for a chance to kiss Eliza in the series. Unfortunately, the producer added a slap scene instead. Eliza laughed, “I bribed them with money! When we’re filming, I bought egg tarts and pork crisp pastries for everyone so I can get more retakes. I feel bad for Kenneth though – I don’t really know how to hit people; I had to pray before I filmed the scene.”

Eliza also dodged a risqué scene where she was initially required to jog while wearing a transparent tank top to seduce Matt Yeung (楊明). Eliza had already prepared for the scene by wearing two bras to prevent a wardrobe malfunction.

Cracking up with laughter, Priscilla teased, “For higher viewership ratings – you don’t even need to wear one! ” Eliza said, “Oh no – the script doesn’t say that. So we can’t change the script!”