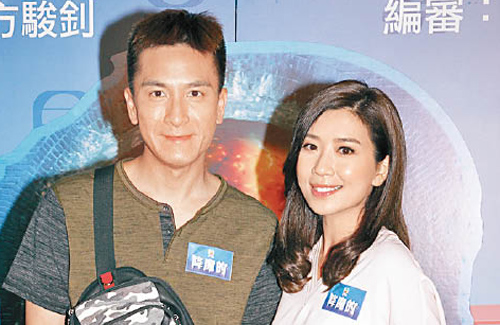 Hoping to bring some fresh ideas into the studios, TVB initiated the project of having its own employees give ideas for storylines. Demon-Conquering Taxi is TVB’s first approved series from this initiative. To encourage employees to come up with great ideas in the future, TVB Executive Felix To (杜之克) showcased his support by compensating the winning employee $10,000 HKD.

When asked if Kenneth will be giving some of his own ideas, Kenneth revealed, “I thought of a story previously. It was about a grandparent and their grandchildren. I can’t play the role of a grandson; maybe I can be the grandpa instead.”

Mandy, who loves dancing, said she wants to suggest a dancing-themed series to TVB. The actress even laughed and said she hopes to see Kenneth pole-dancing in front of the camera.

Sparking romantic rumors with Philip Ng (伍允龍) while filming A Fist Within Four Walls (城寨英雄), Moon recently posted a photo on her Instagram with the captions, “Missing you”. Although fans speculated that the message was meant for Philip, Moon explained that she was just trying to express some emotions she had at that moment. Moon said, “If your friends are in their own hometown, sometimes you’d miss them too.”