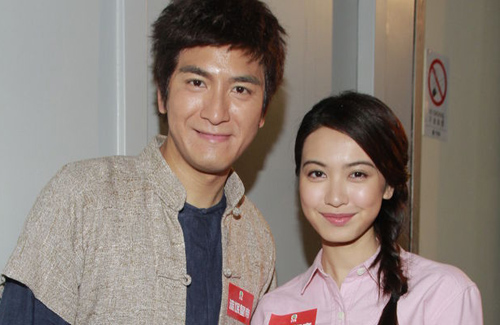 Has Kenneth Ma (馬國明) been playing chauffeur to female artistes that he is interested in? Kenneth has given rides to Tracy Chu (朱千雪) and Rebecca Zhu (朱晨麗), who were both romantically linked with him after filming TVB dramas together. Earlier, Kenneth was spotted again happily driving Tracy home at 2 a.m., but appeared disappointed when the paparazzi interrupted their time together.

An insider had revealed that “Rebecca and Kenneth had feelings for each other before, but Kenneth did not take enough initiative so they didn’t start [dating]” after filming Silver Spoon, Sterling Shackles <名媛望族>. Last December, he was also seen driving Rebecca home after attending a joint promotion together but their relationship did not seem to develop further.

Kenneth may have turned his attention to Tracy instead. Although Kenneth and Tracy shared few scenes together in The Hippocratic Crush 2 <On Call 36小時II>, they became friendly on set and she reportedly went to watch him play soccer. Since both live in the Tai Koo area, Kenneth frequently drove Tracy around, even giving her mother a lift last December. With their new drama, The Misadventure of Zoo <流氓皇帝>, to film for the next three months, Kenneth may have a chance to spend more time with Tracy.

“Kenneth is a very nice person,” Tracy expressed in the past. “He’s very friendly and does not have an intimidating personality.”

On the night the paparazzi spotted Tracy inside Kenneth’s car, the two stars did not shy away from the camera although there was a slight awkwardness in the air. After dropping off Tracy, Kenneth returned home. When asked by the reporter whether Kenneth is dating Tracy, he joked, “If there’s something going on, I would have driven her to my own house!”  Perhaps Kenneth is just a nice neighbor who enjoys doing good deeds.