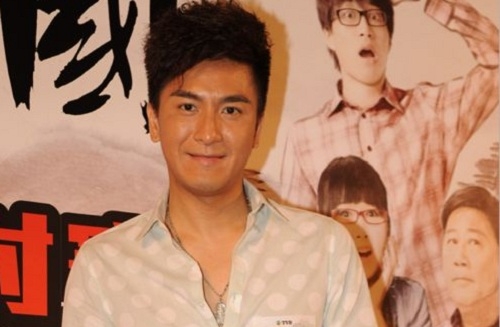 After appearing in TVB drama, Three Kingdoms RPG <回到三國>, Kenneth Ma (馬國明) ascends to one of TVB’s top siu sangs, even stealing the limelight from his costar, Raymond Lam (林峯). Kenneth’s role of an impulsive and comical slacker is a huge breakthrough for him as compared to his previous refined heartthrob doctor role in The Hippocratic Crush <On Call 36小時>. Kenneth revealed that in order to bring laughter to the audience, he did not mind shedding his clean and gentlemanly image.

Seeking advice from a veteran actor in the past, Kenneth said, “There was once a senior who taught me that there were two kinds of people: the inferior people will uglify others, and the superior people will only uglify himself. As long as we do not hurt people, it will be good if we can make everyone laugh.”

“Sima Shun” is a Major Breakthrough for Kenneth

After the broadcast of Three Kingdoms RPG, Kenneth had been criticized for his exaggerated expressions in the series. Kenneth explained his decision for the over-the-top performance, “When I first received the script, I already thought of acting in an exaggerated way. I did consider that some viewers may not be able to accept it. However, Three Kingdoms RPG is a comedy, and Sima Shun is a fictional character. We can’t uglify the historical figures, or else there will be criticisms. We can only uglify Sima Shun.”

Reflecting on his acting skills, Kenneth said, “After acting for many years, a male actor can’t have too many breakthroughs in his looks. I can’t go for plastic surgery or grow long hair, so the only way is to achieve breakthroughs in acting. That’s why I love my Sima Shun role! I am not a comedic actor, but this time I can express my acting in an exaggerated way and this is considered a small switch of my image in my career.”

Kenneth also tries his best to protect people around him. He said he could not understand why his ex-girlfriend Nancy Wu (胡定欣) would be accused of a promiscuous past which involved 7 men. Kenneth said, “Nancy is a good woman and has good character and personality. If the media wants to write, then write about me; do not write about a woman. After all, it is a man’s responsibility to protect a woman. As long as it does not hurt anyone, I will am willing to reveal anything.”

Although willing to speak candidly about his career and romance, he still had the responsibility to protect his family’s privacy. He said, “I am in this line of work, so I can’t avoid it. If there is a need for me to reveal anything, I will reveal it. However, my family is different; I do not want them to be under the public spotlight. I still hope to give my family a comfortable environment.”

Kenneth is indeed a rare gem in the Hong Kong entertainment industry. He exudes his intellectuality from his approach in his career and relationships with family and friends. He always puts others above him. He hopes to delight viewers with his acting and in his private life. He does his utmost best to protect his close ones. It is no wonder that he has quickly ascended to become TVB’s hottest bachelor!