Kenneth Ma (馬國明) grew close with Kevin Cheng (鄭嘉穎), Natalie Tong (唐詩詠), Jazz Lam (林子善), Stephen Wong (黃嘉樂) after filming 2010’s A Fistful of Stances <鐵馬尋橋>. The friends made a tradition to celebrate birthdays and major holidays together. While his friends met up at Kevin’s house for Lunar New Year, Kenneth was noticeably absent. Was he too busy celebrating the holiday with his girlfriend Roxanne Tong (湯洛雯) this year?

It was a busy weekend for Kennth, as his 47th birthday was on February 13, which fell right between Lunar New Year and Valentine’s Day. Kenneth shared that he was planning to celebrate his birthday with Roxanne and his family. No doubt the couple met up again for Valentine’s day the next day.

Although Kenneth was unable to attend Kevin’s Lunar New Year dinner, the friends went ahead with the gathering. Over the years, the group has grown in size with the inclusion of Kevin’s wife Grace Chan (陳凱琳), Jazz’s wife, and Stephen’s girlfriend. While Natalie came to the party alone, she still had a great time playing mahjong and shared photos online.

After seeing the festive pictures, many teased Kenneth for prioritizing his girlfriend over his friends but hope to see Roxanne at future A Fistful of Stances parties. 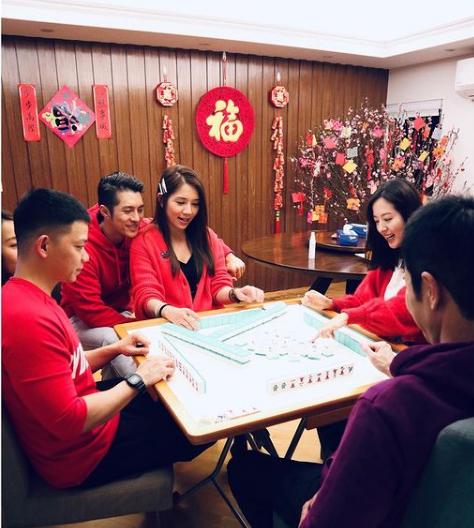