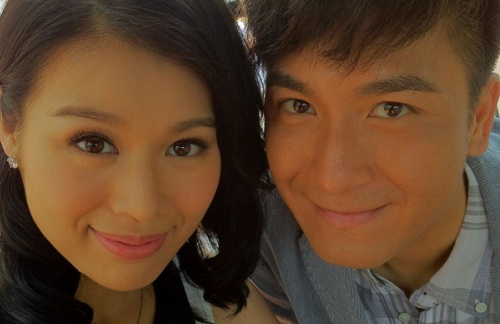 TVB top sui sangs have been plagued with rumors this week.  All three “brothers,” Raymond Lam (林峯), Bosco Wong (黃宗澤), and Ron Ng (吳卓羲) were embroiled in love scandals with mainland Chinese women.  However, filial Kenneth Ma(馬國明) has yet to be linked to any mainland actresses claiming that he does not like to waste money! If Ron, Bosco, and Raymond can learn Kenneth’s practical view of love, it may help them eliminate further scandals.

Attending a promotional event, Kenneth was asked about Ron’s explicit sex messages and the breakup of Bosco and Myolie Wu (胡杏兒). Regarding the exposure of Ron’s explicit audio clip, Kenneth disclosed that he did not know of it.  He said, “I only know that Ron and Viann Zhang (張馨予) broke up.”

Asked whether he found Ron to be a flirtatious man, Kenneth said, “I don’t think he’s flirtatious.  Maybe he looks like he is because he’s so handsome!”  In the audio clip, Ron told a woman to take off her clothes.  Asked whether Ron will normally say such graphic jokes, Kenneth said, “Not him.  I talk more than him.  He’s quite cool.”

With so many sui sangs finding love interest from Mainland China, will Kenneth be next? He said, “I don’t know.  I haven’t met a love interest from China yet.  But I’m more practical.  I feel that casual dating is a waste of money!” Perhaps Kenneth can find a rich girlfriend instead? He replied, “I will not like someone because of their money.  That would feel as if I’m taking advantage of them.”

Currently filming TVB drama, Season of Love <戀愛季節> with Myolie, Kenneth claimed that he only heard about Bosco and Myolie’s breakup yesterday.  Kenneth did not know of the breakup ahead of time because Myolie was very professional while filming and did not appear to be emotionally unhappy. Kenneth felt that it was sad that their relationship ended but it was a matter between the two of them.  He hoped that the media will give them space.

While there were still rampant rumors speculating the reason for Myolie and Bosco’s breakup, Myolie focused on work and continues filming Season of Love.  When the cameras were rolling, Myolie appeared composed and filmed the required scenes in a professional manner.  When her work was completed, she appeared sad and lonely.  The stress from the breakup may have even caused breakouts on her face.

When reporters ask how she is feeling, Myolie responded “Work comes first.”  Asked wheter there was a chance for reconciliation, Myolie said, “I don’t want to talk of such things.”  Bosco said that if the feeling are gone, they’re gone?  She replied, “Really?  I’ve already said all I have to say yesterday.”