Last year, 46-year-old Kenneth Ma (馬國明) broke up with Jacqueline Wong (黃心穎) after she cheated on him with married man Andy Hui (許志安). Kenneth’s career prospered following the split, and he successfully won the Best Actor award. With hopes to begin a new chapter in his personal life as well, Kenneth is getting ready to enter the dating scene again.

Lately, the actor has been diligently going out for facials, and he was photographed frequently meeting up with “sister” Natalie Tong (唐詩詠). Though reporters suggested their relationship is blossoming, both parties denied the dating rumors.

Still, to avoid being reminded of his past relationship, Kenneth is planning to replace the car that he used to drive Jacqueline around in. At about 2 p.m. a few days ago, he met up with former costar Hubert Wu (胡鴻鈞) to go to a car dealership in Kowloon Bay. 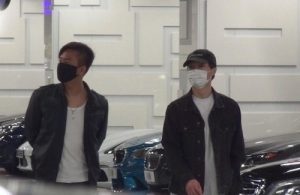 Both parties had on face masks as they walked around the parking lot to check out the cars. Being the practical person that he is, Kenneth often looked at black caravans. He was spotted pointing at cars and studying the price tags with Hubert.

The two stars inevitably attracted the attention of passersby, but Kenneth would purposely turn away. Eventually, the two split up to leave after walking around for about half an hour.