Kenneth Ma Was Never Upset at Andy Hui; Wishes Him the Best 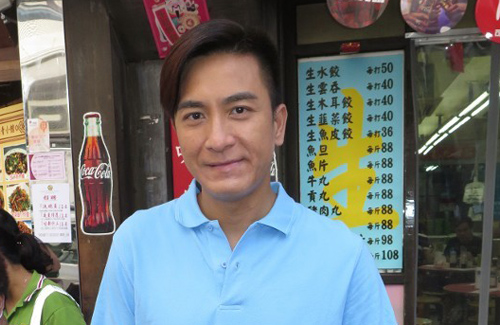 Due to the overwhelmingly positive reaction to his new romance with Roxanne Tong (湯洛雯), Kenneth Ma (馬國明) was seen in a great mood filming for TVB drama Plan “B” <BB大晒> today. The cast filmed in the streets and many locals were excited to see them, especially praising Kenneth for being tall, handsome, and polite.

In an interview earlier, Roxanne had shared the five traits that she liked most about Kenneth, but revealed that she was a little afraid of him because she also idolized him. Kenneth laughed and said that she was only joking, “When we’re together, I don’t feel that she is afraid of me. When you’re dating, there shouldn’t be an element of fear. We must support each other instead.”

Officially dating for only a short period of time, Kenneth said that they did not expect such a big reaction from the public and thanked everyone for their well wishes. The couple has been openly sharing meals together at TVB’s cafeteria, and never tried to hide their relationship. Kenneth’s philosophy was to just act naturally and if they were seen by paparazzi, then they would admit to their relationship.

The reveal of Kenneth’s new romance coincided with Andy Hui‘s (許志安) comeback on ViuTV. Over 14 months have passed since Andy was caught on camera cheating with Kenneth’s then-girlfriend, Jacqueline Wong (黃心穎), in a shared taxi ride.  All involved parties are ready to let the past stay in the past, including Kenneth.

With Andy making his comeback, Kenneth was asked for his thoughts. He said, “I hope he’s okay. It has been awhile since the incident, and everyone needs to look towards the future. I’ve never been angry at him or Jacqueline. After the incident, my anger disappeared very quickly so there is no point in further talking about the issue. I hope that Andy and Jacqueline can have a new start. I don’t know how she is right now, but I hope that she can find her other half and also improve in her career.”

Cheating Scandal Made Andy Hui Into a Better Person

11 comments to Kenneth Ma Was Never Upset at Andy Hui; Wishes Him the Best