Kenneth Ma Will Not Meet Women at Nightclubs 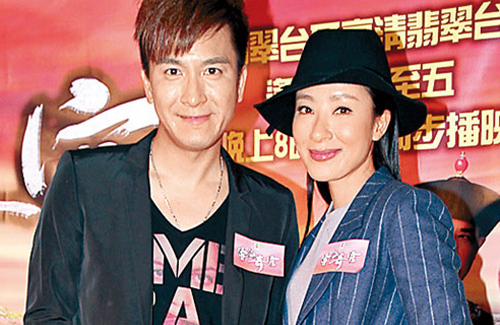 With Kevin Cheng‘s (鄭嘉穎) open behavior in kissing a woman at a nightclub, Kenneth Ma (馬國明) said that this was not his style in meeting women. The still single bachelor, who once professed to having few interests aside from soccer, does not lead an active night life. However, Kenneth said that he hopes Kevin can introduce some women to him.

At a promotional event for Noblesse Oblige <宦海奇官>, Kenneth was asked if he had the inside scoop over good friend Kevin’s dating life. Kenneth does not believe that Kevin has a girlfriend yet, otherwise he would introduce her to their group of friends.

Asked if he will copy Kevin’s techniques in pursuing women at nightclubs, Kenneth said that Kevin is very popular with females. “I can’t learn from him because women pursue him, but I still have to take the initiative.” Asked if he preferred busty women, Kenneth said that he likes women with average proportions. Kenneth joked that he and Kevin have “different standards of beauty” which “will prevent [them] from fighting over the same woman”.

At the event, Tavia Yeung (楊怡) was teased about her marriage rumors with Him Law (羅仲謙). Dating for over two years, the couple is rumored to have wedding plans for this August. Tavia laughed, “My birthday is in August. I received a lot of congratulatory messages lately, but I’m not getting married. I don’t understand how these rumors came about.” Although Tavia said she will definitely get married one day, she denied that the wedding will occur this year.

With Him’s handsome features and rising filming fees, he is especially popular among female colleagues. Tavia said, “I only know about his filming fees after reading the news. Being surrounded by women means that he is popular with the opposite gender. I also have [a lot of male friends]. There’s no need to ‘hog’ him all to myself. I have confidence in myself.”

2 comments to Kenneth Ma Will Not Meet Women at Nightclubs