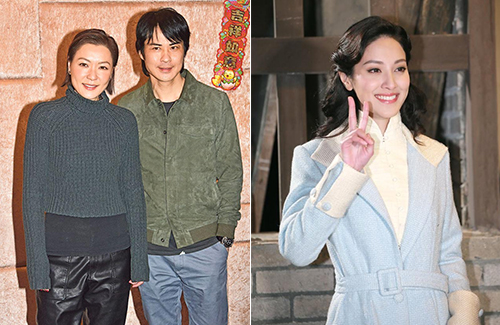 Asking if Kevin would work with TVB again in the future, the actor said, “It’s just a temporary leave. Never say never. However, it’s hard to say when I’ll be back.”

February 14 was Valentine’s Day. Kevin said at the time that he would be spending his day rehearsing for his new musical, while his girlfriend, Grace Chan (陳凱琳), would be shooting her new drama. Did he plan on surprising Grace with anything? Kevin said, “Don’t worry about us! We can manage ourselves. Let’s take care of our work first. If I want to treat [my girlfriend] better, I can do that everyday. I don’t need to wait for Valentine’s Day.”

Grace Met with Kevin After Work

On Valentine’s Day, Grace spent most of her day on the set of her new TVB drama Safety Valley <平安谷‧逐個捉>. She said at the time that she would have to wait for work to be over before she could meet up with Kevin. Grace had hoped that she could manage to squeeze in some dinner time in the middle of her schedule.

“The entire street would be filled with people on Valentine’s Day,” said Grace. “Maybe we’ll celebrate it a day or two late.”

Kevin didn’t give her any surprises on Valentine’s Day, but the two said they would rather spend it together eating a happy meal.

Kristal Has Nothing for Her Husband

At Monday’s dinner, Kristal told reporters that she expected to spend her Valentine’s Day editing clips with her husband, Chapman To (杜汶澤). She shared that her most romantic Valentine’s Day with Chapman was over ten years ago, when they were still getting to know each other. At the time, they celebrated every big occasion together, and on their first Valentine’s Day, Chapman gave her over 10 different gifts, including a wallet, snacks, a wristwatch, and a credit card.

“I used the card to its limit,” said Kristal. Does Kristal still use Chapman’s credit cards? “No. I’ve never given him mine either. We keep our finances separate.” Kristal revealed that she and Chapman would be spending their week skiing in Hokkaido, Japan.