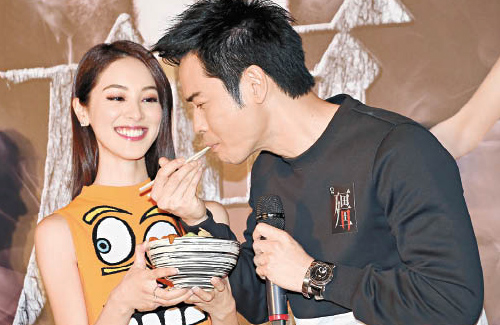 Since Grace is still new to acting, Kevin has been giving her advice on filming intimate scenes. Kevin revealed that he used his kiss scenes with Kay Tse (謝安琪) in the series as reference.

Kevin laughed, “Grace just started acting! She is going to encounter unavoidable kissing scenes. We’ve talked about it and we both understand – it’s easier for those in the industry to understand actually. We watch all of my intimate scenes with Kay together. Sometimes, when we don’t catch the episode on television, we go online to watch it.”

Although Grace and Kevin rarely appear on the same stage together, both openly answered questions from the media. Poking fun at Kevin’s eating habits, Grace revealed, “I’m not a very good chef, but I made him dumplings before. He said they taste good! He’s a pretty big eater though – he ate more than a dozen in one sitting.”

Although she wore a rather conservative long-sleeve floral dress, Anjaylia Chan’s (陳嘉寶) angelic look stood out among the actresses in more revealing attire. Rumored to have been cohabiting with her boyfriend, Anjaylia was quick to dismiss the allegations.

The actress clarified that she did not violate the abstinence vows as part of her Christian faith. Anjaylia said, “The set for the next day’s work was closer to his house. I actually asked my mom for permission to stay over first. We’re committed to our faith.”