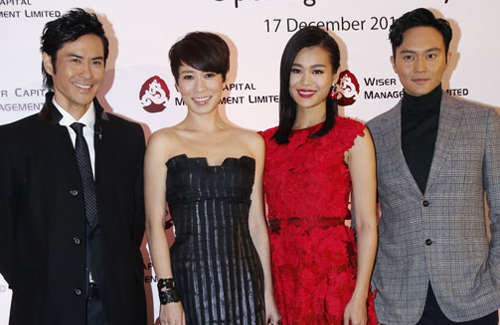 Although Chilam Cheung (張智霖) and Charmaine Sheh‘s (佘詩曼) romantic rumors date back 14 years ago, they claimed they did not have any awkwardness working on the movie version of Return of the Cuckoo <十月初五的月光>. However, at a brand promotional event, Chilam was seen avoiding Charmaine all night.

Chilam deliberately created a wall between Charmaine and himself by pulling Myolie Wu (胡杏兒) to stand next to him during the group photo. When asked if he was purposely avoiding Charmaine, Chilam laughed, “This is called being a gentleman. There’s nothing awkward about it. Besides, our filming [for Return of the Cuckoo movie version] still has a long way to go!”

Also denying that she was used as a human shield for Chilam, Myolie stated Chilam was only being a gentleman in letting the women stand in the middle.

Charmaine’s ex-flame Kevin Cheng (鄭嘉穎) was also present at the event. While Charmaine and Chilam had zero interaction, she was fairly friendly with Kevin. Sending a text message to congratulate Charmaine on her TV Queen win, Kevin said he will also congratulate her in person. Coming to Charmaine’s rescue, Kevin denied there was any tension in the air and said everyone chatted together while backstage. “I don’t know why, but we waited for a long time backstage. We had a lot of time, so we just chatted.”

When Kevin was teased about his more recent rumors with Myolie, he said, “She has many Mr. Rights!”