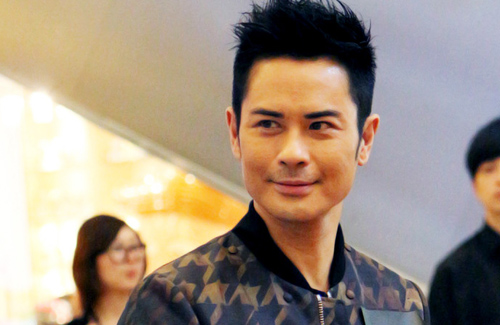 Kevin Cheng (鄭嘉穎) has given his blessings to rumored ex-lovers, Niki Chow (周麗淇) and Charmaine Sheh (佘詩曼), congratulating them on their new romances.  He is genuinely happy for Niki and Charmaine and said, “This is happy news, of course I would give them my blessing. I wish them a happy ending!”

Popular in the mainland market, Kevin has been taking advantage of the opportunity to take his career to a new level. While he earned success in his work, Kevin has yet to find satisfaction in his love life. Approaching his mid-forties, Kevin expressed the desire for a relationship, hoping for a simple sort of love. Although his love life remains empty, Kevin looks towards the future with optimism. In November, he will release a Mandarin EP to commemorate his twentieth year in the entertainment industry. Fans will also be excited to learn that Kevin will film for a TVB drama in 2014.

After she broke up with Kevin, Niki was often seen as the victim of their break up. Finding love again recently with mainland actor Jeremy Tsui (徐正曦), Niki has been unable to hide her joy in public and openly discussed their relationship. She has also quickly transformed into an attentive girlfriend, adjusting her schedule to be with Jeremy as often as possible. “When my boyfriend is around we would share breakfast together… I have started learning how to cook and bought many cookbooks.”

Kevin’s other rumored ex-flame, Charmaine Sheh, was also spotted with a new man. Allegedly the third party that caused Kevin and Niki’s breakup, Charmaine’s romance with Kevin was controversial though it continues to generate public interest. Recently returning to TVB, Charmaine is on friendly terms with Kevin and both are open to collaborating once again.