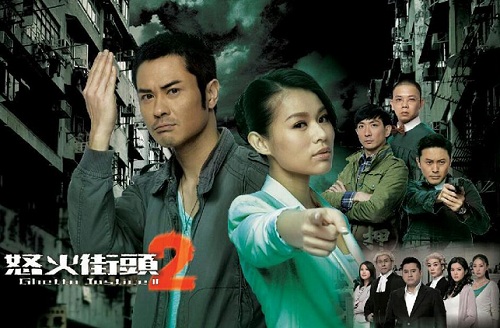 Ghetto Justice 2 <怒火街頭2>, will be airing on July 30th in Hong Kong. Portraying a witty and sloppily-dressed lawyer, “Law Ba” in Ghetto Justice, Kevin Cheng’s (鄭嘉穎) acting career reached its peak. He triumphed at the 2011 TVB Anniversary Awards with Best Actor and My Favorite Male Character, while  sweeping various Best Actor Awards across the Asia. His popularity soared and he has become one of the most highly sought after actors in mainland China, resulting in a tremendous jump in his earnings too!

The premiere episode of Ghetto Justice 2 will broadcast next Monday, July 30th, coinciding with the London 2012 Olympics, in which the drawing power of its cast will be tested. Kevin revealed that in Ghetto Justice 2, he will have many fiery scenes with Myolie Wu (胡杏兒). Besides wild kissing, he will even smack Myolie’s butt in the sequel!

Kevin revealed that in Ghetto Justice 2, there will be more hot and exciting scenes topping the original series. In the sequel, there will be wild kissing, smacking butt and even muscle-flexing scenes! Fans cannot wait any longer for these scenes, as Kevin and Myolie will share a passionate wild kissing in the first week of the drama’s broadcast.

Kevin also disclosed that he initiated the scene of smacking Myolie’s butt. He exclaimed, “I have an uncouth personality. I am known as Law Ba, hence the neighborhood calls Myolie, Law Yau! It will be a hilarious scene!”

Myolie commented that the intense kissing scenes were necessary, as their characters, Law Ba and Kris Wong, are long-time lovers in the sequel. Myolie said, “I was a bit nervous in Ghetto Justice, but we shared more chemistry now that we are more familiar with each other. I feel like a newlywed; the kissing was so intense.” When asked if there were romantic sparks with Kevin during their kissing scenes, Myolie responded quickly, “We are like brothers!”

Kevin also expressed his confidence in the sequel, but was unsure if the ratings would be affected by the 2012 London Olympics.

Both Bosco Wong (黃宗澤) and Myolie Wu have announced yesterday that they have ended their 8-year relationship. This interview was originally conducted before the breakup announcement. When the reporter asked Myolie if Bosco would be jealous of her intimate scenes with Kevin, Myolie brushed off the question quickly, and replied, “No! This is filming only! I think Kevin’s fans will be more jealous! I am confident of pairing up with Kevin, but I also hope that I am a good match to other actors too!”