Kimmy Tong is the Hot New Babe in “Young and Dangerous: Reloaded” 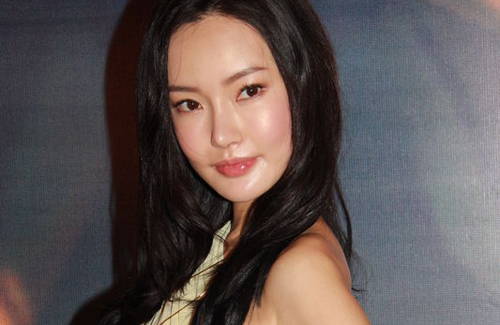 A few nights ago, Him Law (羅仲謙) and Kimmy were on location shooting the final fugitive scene. This will be Kimmy’s one and only appearance in the movie, and her character will be further developed in a future sequel.

Him, Jacqueline Chong (莊思敏), Philip Ng (伍允龍), Oscar Leung (梁烈唯)  and Jazz Lam (林子善), were on location a few nights ago at the Tsz Wan Shan soccer field to film for Young and Dangerous: Reloaded. The scene takes place after triad boss, Uncle Bee, is murdered, with the young triads meeting at the soccer field to plot revenge. The filming resulted in many onlookers and the crew repeatedly told the crowd not to hinder the progress.

To increase filming efficiency, the film crew set up a makeup studio at one corner of the soccer field, but since the field was open, it also attracted a huge crowd. After Kimmy arrived for her makeup session, the crew moved to Tai Kok Tsui for another scene. The scene shows Him and Kimmy trying to flee the city by boat. Even producer Wong Jing, was there for support. The movie has been very secretive about who will play Smartie, and it is rumored that the last scene in the movie will be Kimmy’s only scene in the movie.

Him said he has already participated in some of the fighting scenes, and luckily he was not hurt. Jacqueline joked that Him’s sparring partners got hurt instead.  When doing trial shots, the main actors were usually protected and safety was ensured first. It was up to the sparring partner to make sure the fighting is realistic, and therefore it was easier to get hurt accidentally. Since the scene resembled a a gang fight, and no martial arts were involved. Him said that no doubles were needed.

In the movie, Him Law will be the lover of a rich girl played by Michelle Hu (胡然). Oscar Leung (梁烈唯), portraying Chicken, and Jacqueline will be another pair. Earlier in the movie, she harasses Chicken constantly, to a point that she will drive away all of Chicken’s girl friends, but their chemistry heat up and the two end up as lovers later.

Him’s work schedule have been booked full lately, to the point that he does not even have time for sleep, forcing him to take short naps in the car. This is mainly due to the conflicting schedule with the shooting of the series, Triumph in the Skies 2 <衝上雲霄2>. However, he believes work is his best motivation.

Regarding rumors about Him Law being seen with his Beijing based ex-girlfriend recently, and therefore cheating on Tavia Yeung (楊怡), Him said he already explained that the story was false. He has not contacted his ex-girlfriend in Beijing. Him also said the media should not report something that is not true as it can damage an artist’s career.

When asked if Tavia questioned him about the rumor, Him said Tavia also wrote about it on her Weibo, and she has complete faith in him.

32 comments to Kimmy Tong is the Hot New Babe in “Young and Dangerous: Reloaded”