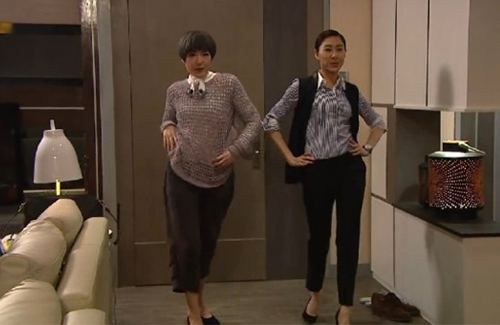 A huge contributor to the viral popularity of last year’s Ghost of Relativity <鬼同你OT> was largely due to Kristal Tin (田蕊妮) and Nancy Wu (胡定欣), both who acted in perfect sync as they recited a long line of dialogue together for a scene in the show. That same “godlike synchronization” (神同步) was also brought over to Ghost of Relativity’s sister production My Lover from the Planet Meow <來自喵喵星的妳>, which is currently airing.

My Lover from the Planet Meow, also produced by Steven Tsui (徐正康), tells the story of an alien cat who morphs into a human to befriend her old masters on earth. In a recent episode, Nancy’s character “Cat” was trying to teach Kristal Tin’s character “Miu Miu” to walk in heels. Miu Miu is a fast learner and quickly synchronizes to Cat’s steps, leading to another godlike synchronizing performance by the two TV Queens.

Quite a few netizens left comments on the scene, and compared it with their performance in Ghost of Relativity. One netizen said, “It seems like this scene was a lot harder to do. They had to speak and walk at the same time. I wonder how many NGs it took?” Another astonished netizen said, “How can they be so in sync?”

Check out Kristal and Nancy’s “godlike synchronization” below!