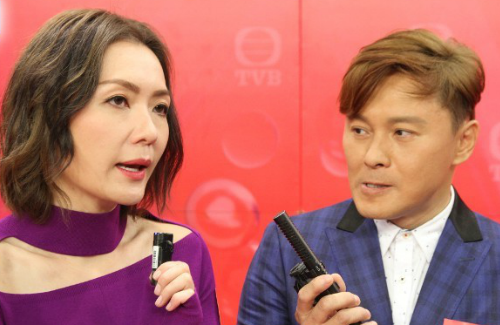 After a one-year hiatus from acting, Kristal Tin (田蕊妮) is back and ready to film TVB’s upcoming drama, Her. Her. Her Girl’s Generation <她。她。她的少女時代>. She appeared at the series’ costume fitting alongside castmates Raymond Cho (曹永廉), Johnson Lee (李思捷), Joey Law (羅天宇), Stitch Yu (余思霆), and Serene Lim (林宣妤).

Kristal and Raymond play a married couple in the drama, which centers on the topic of midlife crises. When reporters asked Kristal if it will be easier for her to portray someone with a midlife crisis since she’s already in her early 40s, the actress laughed and said 54-year-old Raymond already reached the age to have a midlife crisis. She even exposed that he has bladder problems.

On top of that, Kristal jokingly said it’s apparent his waist isn’t that good when Raymond was struggling to play with the fitness ball on stage. Despite the teasing, the actress expressed, “I was honestly very happy when I found out [he] was my husband. I couldn’t sleep for a few nights.”

Meanwhile, Raymond said, “Previously I said I must work with Kristal at least once before I leave [the entertainment industry], who knew I would have a second chance to work with her again?”

When reporters pointed out it’s his first time as the male lead in a drama, Raymond expressed, “I am not the male lead as this is a girl’s drama. My character and Johnson’s revolve around Kristal’s. I quite like acting like a little man. I’ll try to do my best so I don’t drag Kristal down.”

He also shared Kristal’s character is very complicated and conflicted, however, the actress has the capability to do the role justice. Kristal said, “This time the character’s outlook is very different from mine. She is extremely uptight about her daughter’s education, but it’s still easy for me to get into character since she is very down-to-earth.”

She added the character touches people easily, and the script moved her. Raymond said, “Character-wise, everyone has the possibility of having a quarter-life crisis, you just have to see how you’ll overcome it.”