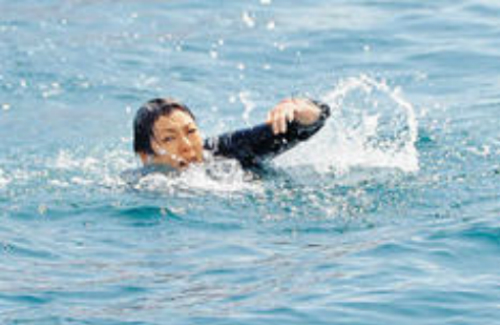 Rising in status after winning Best Actress for her role in Brother’s Keeper <巨輪> at the 2013 TVB Anniversary Awards, Kristal Tin (田蕊妮) returns onscreen for the series’ sequel with much of the original cast. However, Grace Chan (陳凱琳) will be starring alongside Kristal as one of the female leads. According to tabloids, Kristal would have to work extra hard to secure her position at the station.

The cast earlier filmed a scene in Sai Kung, where Kristal was searching for Louis Yuen’s (阮兆祥) whereabouts. She spotted something in the ocean that seemed to resemble a human body and jumped in impulsively. Matt Yeung (楊明) later saved her and brought her onto a yacht when she was about to drown.

The filming process had been extremely tedious, with Kristal and Matt repeatedly entering the water over ten times. In total, the artistes swam a few hundred metres and were in the ocean for three hours. However, Kristal professionally completed her drowning scene in only one take.

In a following interview, Kristal laughed and expressed that she is not afraid of water, but is afraid of the heat. “A few days ago, I was shooting an outdoors scene and got a heatstroke! After returning to the company, I felt dizzy and nauseous. I ran for the toilet to vomit. My colleagues joked that I’m pregnant! But the doctor later told me that I had a heatstroke, fever, and gastroenteritis. Filming was cancelled the next day.”

Ghost of Relativity <鬼同你OT>, Kristal’s drama from earlier this year, was well-received by viewers and netizens claimed she is TVB’s new top sister. Kristal thanked netizens for their approval and exclaimed she is already happy that viewers enjoyed the series. In terms of her chances in winning this year’s TV Queen title, Kristal expressed that she will leave the results up to fate.