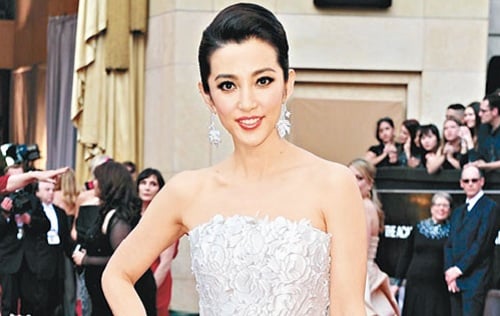 Internationally renowned mainland actress, Li Bingbing, made her first Oscars appearance yesterday. Wearing a sparkling mermaid style gown, Bingbing accessorized with a $3 million HKD Lana Marks diamond handbag. At the awards ceremony, the 38-year-old star was the most prominent Chinese actress last night. In addition, Bingbing’s style at the Oscars received approval from an authoritative American fashion site, who selected Bingbing’s style as one of the top ten looks at the event.

Although netizens ridiculed Zhang Ziyi and she was absent from the awards ceremony, the actress revealed that she was in fact one of the voters in determining the winners for this year’s Academy Awards. Ziyi wrote on her Weibo blog, “The results of the Oscars will be announced today. Reflecting back, the predictions of the judges were quite good this year! ” Jayne: Li Bingbing is 39 years old, soon to be 38? She does not look her age at all! She looked beautiful at the Oscars!