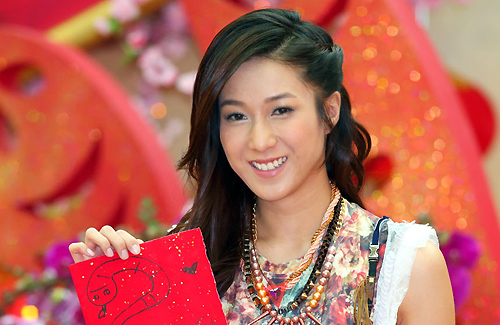 A hot contender for this year’s TV Queen award, Linda Chung (鍾嘉欣) is trying to maintain a normal mindset while dodging paparazzi and baseless rumors.

Linda has been a target of tabloid news after reports alleged that she and rumored boyfriend Philip Ng (伍允龍) have broken up. She was later linked with Ruco Chan (陳展鵬) after the two were seen sharing a car ride to a promotional event for Brother’s Keeper <巨輪>. As a result of the high public exposure, Linda has been followed by paparazzi on numerous occasions. “There have been more paparazzi following me lately. I am very oblivious to all of this. The locals had to warn me that I am being followed.”

Addressing her love rumors on October 28, Linda once again emphasized that she is not dating Ruco, saying that the news was probably fabricated to promote their current series. Despite the false allegations, Linda is happy that the public embraces their pairing and is open to participating in public events with Ruco as an on-screen couple.

As for her chances of winning TV Queen, Linda feels content with just a nomination and is facing the awards race with a positive attitude. Tavia Yeung (楊怡), who many see as Linda’s strongest opponent this year, believes that Linda deserves the title due to her work ethics, saying “I would be equally happy if [Linda] wins….”