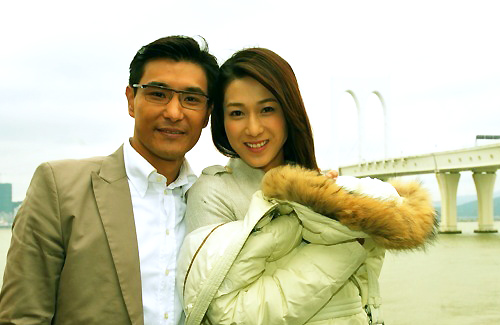 Linda Chung (鍾嘉欣) and Ruco Chan (陳展鵬) were romantically linked after being sharing a ride to a promotional event on Sunday. Although some fans are hopeful that the Brother’s Keeper <巨輪> co-stars are taking their romance off-screen, Linda has stepped out to deny all the allegations.

On October 13, the cast of Brother’s Keeper was scheduled to meet at the ferry terminal to attend an event in Macau. Already developing a good rapport during filming, Ruco offered to give Linda a ride to the docks and appeared at her residence alone early in the morning. On the way, Ruco accidentally rammed his new Jaguar F-TYPE sports car into a taxi and immediately pulled over to examine the damages. Seeing the crowd that began to gather, Linda hurriedly stepped out of the car and ran off.

Although Ruco usually kept his distance from female co-stars, he seems to have developed a friendlier attitude in recent months. Earlier, the 36-year-old was linked with Ankie Beilke (貝安琪) when he also gave her a ride home. His public flirtations with Ankie further fueled the allegations. While both seemed to show romantic interest and have freely praised each other, Ruco ultimately decided to deny the rumors last week. He also seems adamant about ending the gossips with Ankie, appearing aloof and ignoring her during Sunday’s event. In contrast, he was much more attentive to Linda and less anxious about being friendly with her in public.

When reached for comments, Linda flatly denied the gossip, saying, “Everything in the reports are false. Ruco and I live in the same area so I asked for a ride. We are just colleagues.” She joked that she should keep away from Ruco from now on, worried perhaps about becoming involved in another dating scandal.