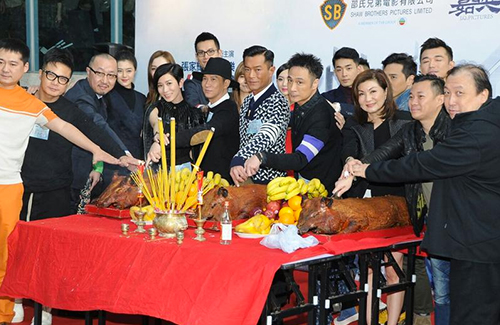 A press conference to commence the film’s shooting was held earlier this week, attended by the main cast and crew. Aside from Hong Kong, Jazz revealed that the film will also shoot in Macau and Brazil sometime in February. Louis shared that most of their scenes in Brazil will be action sequences. While the actor is looking forward to traveling overseas, he is not looking forward to the 30-hour flight. Nick, on the other hand, expressed that he is more worried about losing his luggage. “It always happens to me,” he said.

Louis and Nick’s appearances in a TVB sequel movie have led to rumors speculating that the former television stars are planning to make a return to TVB dramas. Asking if they’re interested in filming a TVB drama again, Nick said, “That depends on Louis.” Louis, who still owes TVB about 20 episodes, said, “I’ll consider [coming back] if I get the right script and can find the right time.”

There are sources reporting that both Louis and Nick were offered astronomical prices for the film. Nick declined to elaborate, expressing that it is not in his right to do so. Louis also refused to comment. In regards to the reports that Louis have earned a whopping $400 million HKD last year, Louis said, “It’s just gossip. Don’t take it so seriously.”

Unlike Louis and Nick, Francis and Charmaine will not get the luxury to travel to Brazil for their scenes. The onscreen duo, who will be portraying cops, will focus their story in Hong Kong and Macau. But Francis said he does not mind missing out, because he looks forward to seeing Charmaine’s sexy appearance. “She’ll have scenes wear she wears a bikini and a thong,” he disclosed.

Charmaine added, “It’s probably my most sexiest appearance yet.” She then asked Francis if he wanted to request more scenes from the director, to which Francis joked, “I wouldn’t mind, as long as I get to wear one with you.”

Although Charmaine was announced to take part in the web drama sequel of Line Walker, which will be TVB’s co-production with Mainland China’s Penguin Pictures, recent developments are claiming that the actress dropped out due to her decision to not extend her TVB contract.

Charmaine denied the reports. However, she did not confirm if she would take part in the sequel either. She simply said, “Let’s take things one at a time. Finish this movie first.”