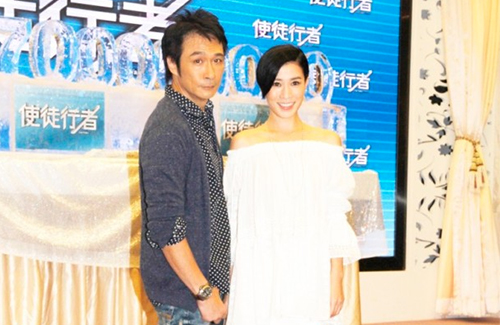 In regards to Line Walker’s box office success, Francis joked, “I’m definitely not excited about it! It should gross at least over $1 billion! $700 million is not enough! Let’s hope it’ll continue to rise.”

Charmaine added, “I am happy. It is my first movie to break $700 million.” (Would you want it to gross more?) “How greedy! But like what Francis said, of course I would like it to earn more.”

Asking if the studios are planning for a sequel, Charmaine said, “I heard they’re planning it.” Francis said, “Let’s do all three at once!”

Would Charmaine be asking for a pay raise? She said with a smile, “I rather I get more screen time.” Francis said, “We’re tied to our contracts for the next few years. We can’t ask for a raise even if we wanted to.” Francis said he’s satisfied with his screen time in the film, expressing, “I already felt laborious with what I had, so I am satisfied.”