Louis Fan Denies that JJ Jia is a “Homewrecker” 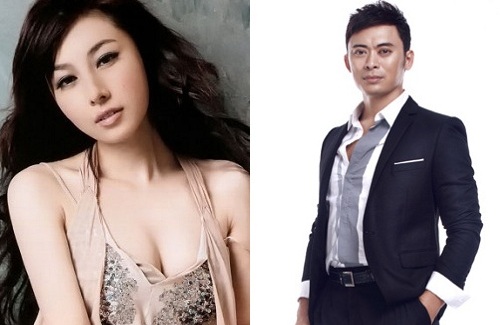 After breaking up with Sammy Shum (沈震軒), JJ Jia (賈曉晨) reportedly embarked on a new relationship with martial arts star, Louis Fan (樊少皇).  Dating for only a month, tabloids reported that Louis was married with a 15-year-old daughter and 10-year-old son. Did JJ unwittingly become the third party?

It was understood that Louis Fan pursued JJ Jia intensely earlier in the month, quickly winning her heart. JJ even went to mainland China to visit Louis when he was filming there.  During the visit, she posted a picture of a portrait from a hotel room on Weibo while writing “Simplicity is happiness.”  Half an hour later, Louis posted the same portrait and wrote, “I want happiness.”  He has since deleted the posting.  This picture fueled speculations that Louis and JJ had stayed in the same hotel room.

When asked of this, JJ advised that she did not wish to discuss private matters.  She said, “I have nothing to hide.  I didn’t delete my posting.”

Tabloids reported that Louis fan has a wife and two teenage children in Hong Kong, while dating JJ Jia. On August 23rd, Louis released a public statement to clarify the scandalous rumors. Admitting to having a daughter and son, Louis explained that he met his children’s mother when he was 23 years old, but they never got married.  He had broken up with her 4 years ago.  In his 800-word explanation, he said that he would continue to love and take care of his children.  Normally, Louis would give most of his filming fees to support them.  He did not divulge the fact that he had children as he did not wish to affect their lives.

In his press statement, Louis wrote, “I truly do have a son and daughter in Hong Kong. Many years ago, I have already separated from the mother of my children due to incompatibility in our love relationship and lifestyle. When I was 23 years old, when I was rash and immature, I decided to live with the mother of my children. We agreed to not get married at the time. While living together, we had two children. While living together for many years, the initial rashness faded, while the communication and incompatibility issues continued to grow. Our love relationship became broken. Since I spent the majority of my time in mainland China, I was unable to save the relationship in time. To at least fulfill my responsibility as a father and in order to visit my children, this became the reason for me to wish to return home. However, the problems over the last 10 years and the continual long-distance separation did not help advance our relationship.”

Louis continued, “Approximately 4 years ago, I suggested that we break up, asking her to let go of this relationship which was unable to be saved. I promised to continue to love my children as in past years and give the majority of my filming income to them. I do not think that this was the best solution, but for me, this is the only solution I can think of for my children.”

JJ said that she had met Louis at Timmy Hung’s (洪天明) wedding in March.  JJ felt that Louis is a good person.  They were currently getting to know each other and had wanted to further develop their relationship. Regarding Louis’ family situation, JJ replied, “Before I can make a decision on the future, I hope they would clarify the circumstances.”

It was reported that Louis’ alleged wife disclosed that she did not wish for their 15-year-old daughter and 10-year-old son to know of Louis’ relationship with JJ.  Tearfully, JJ responded, “I cannot accept any of this.  If somebody said that, then I feel that the situation is not that simple.”  Because of this news, JJ had been branded as a homewrecker.  JJ claimed that she had never thought of it.  She was only a normal girl looking for innocent man to date and eventually get married and have children.

In her Weibo post on August 23rd, JJ indicated that she felt that her initial response to the media may have been misinterpreted. Apologizing for the lack of clarity in her response, JJ said that she did not read the tabloid report and thus was unable to accept the rumors in the scandalous report. JJ said that Louis has already explained his family situation to her, which matched the contents of his press statement. JJ emphasized that she did not intend to imply that Louis had lied to her.

Realizing that JJ was upset over allegations that she was a “homewrecker,” Louis was quick to clarify the scandalous allegations. Louis displayed his regard towards JJ and wrote on his Weibo, “If she has a new decision, I will absolutely respect it. Please do not misunderstand her.”