Louisa Mak is Just a Regular Girl with Her Own Opinions 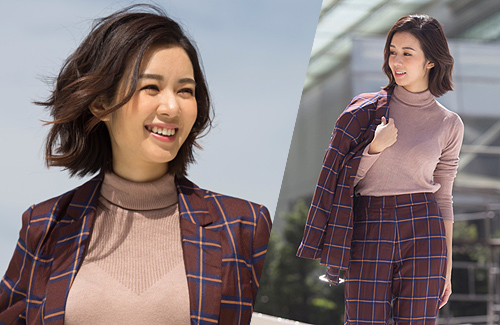 Miss Hong Kong pageant winner, top Cambridge University student and now a licensed lawyer, Louisa Mak (麥明詩) describes herself as a regular person, who happens to be interested in acting. Recently starring in OMG Your Honour <是咁的，法官閣下> as an opinionated young lawyer, Louisa’s performance has improved by leaps and bounds compared to her previous roles in 2017’s Line Walker 2 <使徒行者2> and My Ages Apart <誇世代>. Though her enunciation and delivery is still far from perfect, the consensus is that she is more natural in her current role than before.

Louisa admits that acting is tough and is aware that she has many challenges to conquer. One problem she faces is that the more she wants to come across as natural, the more contrived the end result would be. “Sometimes I am able to deliver; sometimes I fall short. Being an actor is somewhat like being a doctor, people will remember most deeply that one time when you screw up. Now, I hope I can achieve zero mistakes,” She also highlighted how the professionalism of her co-actors, such as Hugo Wong (黃子恆), is invaluable in helping her get into the scene.

Recently, Louisa had a chance to act opposite three-time best actor Wayne Lai (黎耀祥) in new drama Assassin <殺手>. Playing father and daughter, Wayne’s acting style was an eye-opening experience. “He was very relaxed the whole time and made me feel as if we were chatting idly; after ‘replying’ him I would wonder why the lines are so familiar, before realizing they are from the script. That is real skill – he would be reciting lines but what you glimpse through his delivery is life,” Louisa admits her lack of confidence in ever achieving Wayne’s level of brilliance, “Some things really depend on talent.”

Recently, Louisa shadowed Kearen Pang (彭秀慧) who imparted her more tips about acting. Describing acting as a muscle that needs training, she realizes that “The more practice the better, and more comfortable you get. Practicing to access certain emotions means you can act them out more accurately and exit faster too without affecting your own emotions.” Besides getting into character faster, Louisa also  hopes to be able to realistically portray her character’s relationship with other co-stars within her limited screen time.

Besides this, Louisa also points out the societal pressure for women to conform to certain stereotypes, such as when the media collectively sings praises of actresses who have married and quit the industry by describing them as “quitting to be a good mom”. This, she feels, puts invisible pressure on women who are therefore surreptitiously told that staying at home to look after her husband and children is what they ought to choose.

Stopped Being As Vocal

Once highly vocal about issues she sees as unjust, Louisa seems to have toned down more in the last two years. She explains that to a change in her thinking – now, she prefers use her actions to prove her point rather than vocalizing them, as she feels that sometimes voicing things out merely serves to deepen the polarity between both sides. Just like how Louisa quietly got her lawyer’s license in the United States recently, she has proven how conscientious action sometimes wins over mere argument.

Since winning Miss Hong Kong 2015, public opinion about Louisa has been manifold, with supporters praising her fearlessness in speaking up and detractors pouring scorn on her lack of abilities as an artiste. Good or bad, Louisa takes it all in stride, “After saying something out loud, it would just make the people who agree to agree more, and detractors to object more. Then there’s no meaning in saying it.”