When Lu Han (鹿晗) revealed last October that he is dating his Sweet Combat <甜蜜暴击> costar Guan Xiaotong (关晓彤), a lot of his fans left. One of the biggest open secrets of becoming a successful idol is to stay single, and if you are in a relationship, it has to stay hidden. For Lu Han, that was definitely something he considered. 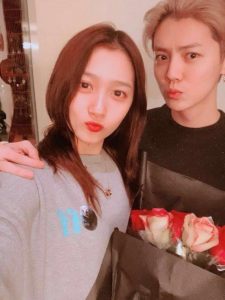 “I think it really depends on the person,” he said. “As for my personality, I would feel much better if I announced it. That’s for me. I don’t know how others would take it, but I feel that [announcing the relationship] is a responsibility I have to take.”

He considered not revealing the relationship at all, but he hates having to live underground, hiding. “If I never revealed it, who knows what would happen? Maybe I’ll have three illegitimate children by now. Rumors are scary.”

It is a popular opinion to assume that idols only have the looks, but not the talent. “Flow celebrities” (流量明星) like Lu Han, who has a huge online fanbase, has footprints all over the Internet, and any move he makes would make it to trending charts on social media. Lu Han has to be smart with his decisions and careful with his words.

Lu Han would try to stay out of social media and refrain from reading too many things online. He would only know if he would make it to trending page through friends. “Because first off, I don’t think I’ve done anything wrong. I didn’t do anything that would set bad examples. I am a youth who is very positive and full of energy. I don’t think there’s any harm in that kind of gossip. If there are that many people talking about you, then that means there are that many people who pay attention to you.”

Sitting at 60 million followers on Weibo, Lu Han also receives anti-fan messages on a regular basis. He laughed and said, “Anti-fans follow me more than I follow myself. Maybe they are the true fans.”

Many perceive the receipts and numbers to be the reason why “flow celebrities” are so successful, but for Lu Han, one cannot achieve success by just having the numbers. “It’s easy for the general public to misunderstand this, because all they see are the numbers. They will not approve whether or not that person has a shining point.”