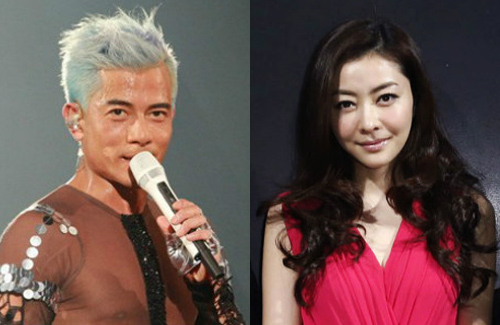 Together for nearly seven years, Aaron Kwok (郭富城) and Lynn Hung’s (熊黛林) on-and-off relationship are frequently in the tabloids. With news that Lynn had moved out of their shared home, wedding plans seemed far out of reach. Recently, Christine Kuo (苟芸慧) was reported to have captured Aaron’s heart,  causing further questions over his future with Lynn.

On Monday however, Lynn squashed all rumors by appearing at Aaron’s concert, looking as blissful as ever.

Although her absence during opening night fueled break-up rumors, Lynn fulfilled her earlier promise and attended Aaron’s second performance on Monday, March 18. Lynn purchased four tickets with her own money and brought her mother and assistants to enjoy the show. Lynn appeared excited throughout the concert, waving her glow sticks and snapping photos with her phone like a young fan.

Aaron seemed aware that his girlfriend and future mother-in-law were in the audience. He looked cheerful and gave an energetic performance. During the concert, Aaron walked past Lynn’s section while hand-shaking with fans in the audience. He suddenly turned around and waved at Lynn’s direction, causing the crowd to stir. Aaron professed his love for Lynn throughout the night, saying “You are my only one” and adding a quick “I love you!”

The highlight of the evening came when Aaron belted out “Never Ending Love” <永遠愛不完> while staring at Lynn. Lynn looked absolutely in bliss and remained cheerful even when surrounded by reporters and Aaron’s fans after the show.

At a Moiselle function yesterday, Lynn was all smiles when asked about Aaron’s love confessions. She denied that the love message was directed only towards her, saying that Aaron was singing to the entire audience.

When pressed about Aaron’s recent rumors with Christine Kuo, Lynn dispelled the reports and stated that she completely trusts Aaron. “Everyone can see the truth! He’s very busy and spends all of his free time sleeping in. Why would I grill him about these irrelevant rumors?” Lynn also stated that they are not afraid of the dreaded “seven-year itch” and that they have a great relationship together.