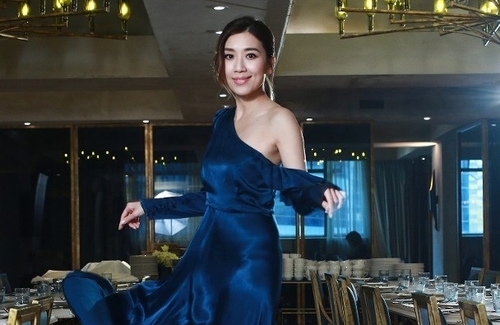 When asked if the 35-year-old has the confidence to take home the Best Actress award, she said, “I’m afraid to think too much as I normally don’t have fate with winning lotteries, so winning two awards in one night is already enough. So to win again for the third time seems very difficult. At this moment, I don’t want to give myself too much pressure, and I don’t want to think too much, but of course, I would have more confidence than before.”

Despite receiving critical acclamation, she admitted her acting was not up to par when she was just a newcomer. “In the beginning, I did not do well, so I thought being an actress was not suitable for me,” Mandy shared. “I was so frustrated about it, I went to take psychology lessons and acting lessons, hoping it would give myself a breakthrough.”

The actress was also lucky to have met a lot of skilled veterans to help her improve slowly but surely. She was only able to enjoy acting while collaborating with Myolie for TVB drama A Chip Off the Old Block <巴不得爸爸>.

”It was my third or fourth year of acting, and it was my first time working with Myolie, who played my older sister,” Mandy shared. “At the time it was my fourth or fifth work. I used to be very nervous and scared on the set when I saw my seniors, so I wouldn’t be able to enjoy acting even though I really love it. I would also be scared of the cameras and afraid I wouldn’t be able to deliver my lines.”

She was like this until she met Myolie, who would often talk to her on set. They became familiar with each other and Mandy was soon able to enjoy being on set and being immersed in the character. “I quite liked the results when the drama came out,” Mandy said.

On the topic of Myolie and the other members of the Nonsense Club, Mandy said they infected her with their serious work attitude. “They all debuted earlier than me, so I have the least experience compared to them. They are more decisive and takes initiative to get what they want, very persistent towards work, which I am relatively lacking myself,” she said. “In the past two years, they influenced me to become more motivated.”

On Marriage and the Future

Thus, she plans to continue to work hard towards her career before settling down with her boyfriend of six years. “When I was young, I did think I would get married by 30 years old, but I have been too busy to think about it,” Mandy expressed. “My other half gives me a big sense of security, allowing me to focus on my career.”

In fact, they have a consensus to work hard in their careers before getting married. Mandy added that the wedding would probably not be of extravagance since her boyfriend is not from the entertainment circle. She also shared they don’t always see each other because the quality of the time spent together is more important than the quantity.