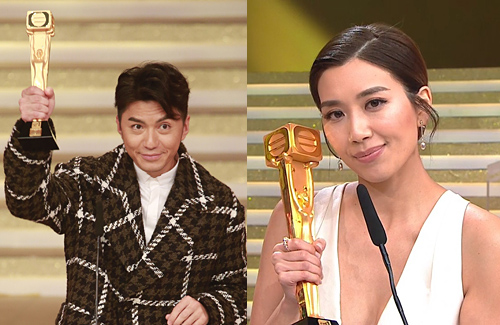 Two days ago, the top three finalists in the “My Favorite Actor” and “My Favorite Actress” in Malaysia and Singapore were announced. It was predicted that this year would see new winners, who were determined through online votes by viewers in the respective countries.

Mandy was grateful to win two Favorite Acting awards in one night. Aside from thanking the cast and crew of Threesome, Mandy didn’t forget to acknowledge Liza Wang (汪明荃). “I worked with her in my first drama. At the time, I performed very poorly which Liza also pointed out. But just now, she said my acting has improved a lot in recent years. People do notice [the difference]. Thanks to TVB for giving me opportunities, my family, and good friends in the Nonsense Club and Candice Chiu (趙希洛).” Mandy is also grateful for former producer Poon Ka Tak (潘嘉德) in giving her opportunities at the start of her career.

Benjamin thanked viewers in Malaysia and Singapore for voting for him. In his acceptance speech, Benjamin spoke about the memorable moments while filming Stealing Seconds, and thanked his co-star Natalie Tong (唐詩詠). “This great news makes me truly happy. I’ll definitely remember tonight and cherish these moments. Entering the industry for 20 years, this year has been very [fruitful]. Thanks to everyone who voted. I’ll continue to work hard and continue acting until the end of my life.”

Speaking with the press about their twin victories later in the evening, Mandy and Benjamin were both very excited by their awards. Mandy said she was focused on rehearsing her onstage performance for the Anniversary Gala and didn’t spend much time dwelling on the awards. “I was very nervous when the results were announced. It felt a bit like a dream, but I’m very happy.” She was especially grateful for her close friends’ support, since Mandy often doesn’t have enough confidence in herself.

Benjamin was teased that his girlfriend Bowie Cheung (張寶兒) was very excited by his awards, and Carol Cheng (鄭裕玲) even pushed the pair to get married to add onto the good cheer. But Benjamin plans to focus on his career for now and will think about marriage at a later time. Asked if he has greater confidence in winning TV King in the Hong Kong region when the awards ceremony next month, Benjamin said, “I’ll just embrace it with a regular attitude.”