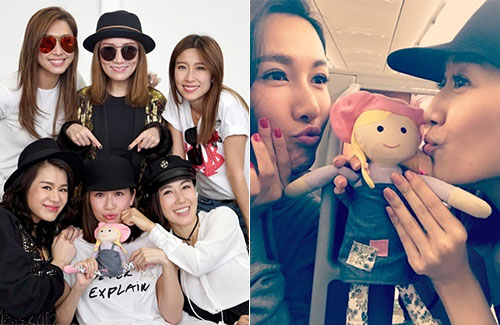 “This is going to replace Mandy Wong for now,” said Nancy when she held up a stuffed animal. “We’ll be talking to it.” (Will Mandy join later on?) “I hope so. It’s best when we’re all together.”

Reporters were surprised that Myolie would also be filming the program, as the former TVB actress is about six months pregnant. Asking if her husband would be worried about her, Myolie said, “He’s not worried. The doctor said I can still fly until I’m 36 weeks in. It’s a rare opportunity to hang out with the girls. They’re all too busy, filming drama after drama. Usually we won’t even be able to meet up for meals.” Myolie said the girls expect to film some bikini shots when they land in Australia.

It turned out that Mandy was attending after all; the Nothing Special Force <雜警奇兵> actress dropped her big surprise when she met up with the girls in Australia. Elaine was especially emotional—uploading a group picture to Instagram, she wrote, “Just as we thought Mandy Wong wouldn’t be able to come to Australia, this [girl] showed up at the Qantas Lounge… [she] got [me] tearing up! Although you lied to us for an entire week, this surprise was so good! Yeah! All six of us are finally together. It’s a true vacation for the Nonsense Club!”

Nancy said, “Someone lied to us all week, and said she couldn’t go. We were so sad! It turns out… Mandy Wong… you’re good!”

Mandy herself said, “To surprise the girls, I lost a lot of sleep! Sorry gals, I made you cry, but how can it be a nonsense trip when we’re not all together?”