Above: Andy was found cheating with his manager, Bi Ying (right).

Catherine Hung (洪欣) and Andy Zhang’s (張丹峰) marriage was rumored to be on the brink of divorce after the media photographed Andy and his manager Bi Ying (畢瀅) spending the night at a hotel in April. Intent on saving their marriage, Andy ended his affair with Bi Ying and the couple was seen happily enjoying a shopping trip.

In 2009 the couple announced their marriage and netizens were skeptical if the marriage will last as Catherine is 11 years older than Andy. Despite the netizens’ concern, the couple had a daughter five years after the marriage.

Throughout the marriage, there were rumors that Andy had an affair with Bi Ying. The rumor heated up in April after Andy was caught spending the night in the hotel with Bi Ying. Not helping to dispel the rumors, Catherine remained silent on the matter, while Andy also shared in an interview that the two have had arguments.

Since Andy’s cheating photographs were revealed, the couple’s relationship appeared to have cooled and they are rarely seen together. Last month, Catherine and her daughter went on a vacation without Andy. On the other hand, Andy stayed behind and posted a vacation picture of his daughter and himself on his social media page. With the lack of family pictures, netizens concluded that the couple’s marriage changed for the worse.

Andy worked hard to earn Catherine’s trust and in a month’s time, the couple’s marriage appeared to have improved. Catherine, Andy and their daughter were photographed shopping with their friends recently. Focusing his attention on his family, Andy was seen accompanying Catherine and daughter in a jewelry store and did not leave their side.

After shopping, Catherine was struggling to carry her purse while holding her daughter’s jacket. Andy earned brownie points when he took the initiative to carry the jacket. With a radiant smile on their faces, the couple left the area while they lovingly held hands. 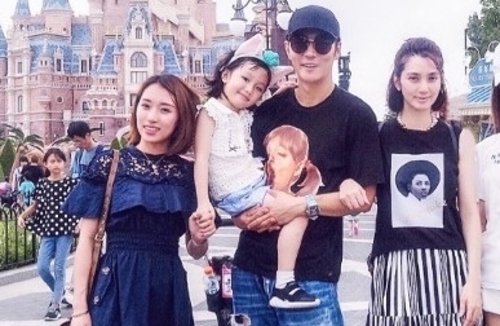