The actress is said to have cut off her husband’s finances to force him to break up with his alleged lover.

48-year-old Catherine Hung (洪欣) has been married to Andy Zhang (張丹峰), ten years her junior, for a decade. However, news of their marital discord surfaced in recent years. In April, rumors swirled that Andy had cheated on Catherine with his artiste manager Bi Ying (畢瀅), and photos of the two at a hotel room circulated online. Shortly after, Bi Ying left her role and stopped being Andy’s manager.

Although famous Chinese blogger “Entertainment Spy” published a Weibo apology post in June to the parties involved claiming it had released false news regarding the affair, netizens remain curious as to why Catherine had chosen to remain silent in the light of the episode. To add to the mystery, Catherine’s 17-year-old son Ashley Zhang (張鎬濂) who was fathered by her ex-boyfriend Max Mok (莫少聰), had deleted all of his social media photos taken with Andy immediately following the alleged affair. Along with the fact that Bi Ying officially resigned from her role as Andy’s manager, netizens were all the more convinced that there was more to the entire episode.

It was reported that Catherine had used her own savvy means to kick away Andy’s mistress. Talk has it that Catherine, who was financially savvy, controlled most of the couple’s finances. Apparently, she owns two units in Happy Valley’s Tsui Man Court, one unit in Tung Fat Building as well as a luxury residence with parking space in Leighton Hill, with her real estate assets valued at a total of $100 million HKD. These were owned solely under her name and not co-owned with Andy. 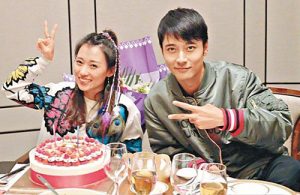 It was said that Catherine cut off Andy’s finances after the adultery rumors, and eventually Andy was forced to break up with Bi Ying, who also left her job position.

In April, when the photos of the two at the hotel were released, Andy had responded by claiming that it was all empty talk. Later in May, Andy released a statement denying the rumors and added that Bi Ying had quit her role as his manager. That same month, Catherine and Andy attended a friend’s wedding in Harbin, and thereafter flew to the United States with the entire family where they spent time together.

In June, a blog claimed that the adultery rumors surrounding Andy were baseless and untrue. Yet others commented that Catherine, who did not display sadness as the grudging wife nor speak up for her husband publicly, yet was still able to defend her marriage masterfully.