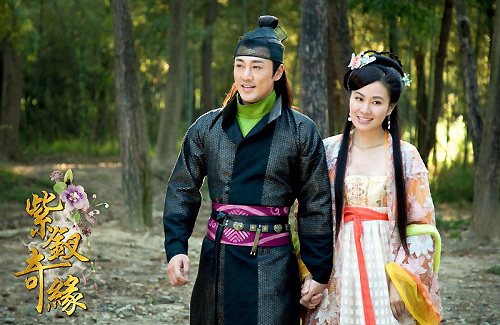 The two first collaborated in 2002’s Eternal Happiness <再生緣>. Their excellent on-screen chemistry ignited dating rumors. Many fans supported the idea and hoped to see them as a real-life couple. Taking advantage of the popularity of their pairing, TVB quickly reunited Michelle and Raymond in Lofty Waters, Verdant Bow <雲海玉弓緣> in the very same year.

During the interview, which is scheduled to air on August 10, Michelle clarified that she has never dated Raymond and stated the two maintain a strictly professional relationship. “We haven’t seen or contacted each other in ten years, but we understand each other well while on set. Raymond likes to joke around and call me ‘boss’.”

Winner of Miss Chinese International in 1999, Michelle felt that Raymond had the most potential out of all the male artists who debuted around the same time. When Raymond finally achieved his dream of holding a concert at the Hong Kong Coliseum, Michelle was so happy for her friend she even cried.

Last year, Michelle’s production studio made a large investment in mainland drama series, Loved in the Purple. Certain about Raymond’s talent and professionalism, Michelle recruited him with an 8-digit salary. Reflecting on her choice, Michelle thinks it was not expensive at all and believes Raymond deserves every penny.