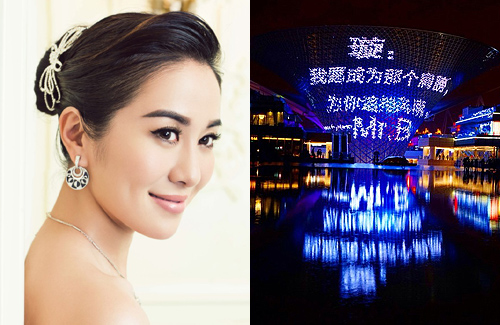 Michelle Ye’s (葉璇) love life has been a complete mystery until recently. A mysterious man known as Mr. B spent $6 million HKD to publicly announce his love for Michelle. The one-minute video clip of Mr. B’s love confession for Michelle was uploaded online earlier.

Against the backdrop of the Expo Axis, which was constructed for the 2010 Shanghai World Expo, Mr. B played a photo slideshow of Michelle. In between the photos, the following message was shown, “Michelle, I hope to be the shoulder that blocks you from the wind and rain – Mr. B.”

After the news became viral on social media platforms, an insider came forward and revealed Mr. B as one of Michelle’s classmates at Cheung Kong Graduate School of Business. Although Michelle initially turned him down, Mr. B did not give up and continuously pursued the 34-year-old actress.

Elaborate love confessions with the Expo Axis are not uncommon and have previously happened before. However, to display such messages along with a light show costs roughly $6 Million HKD.

Michelle Gives Hints at Relationship With Mr. B?

Although it was rumored that Michelle initially turned down Mr. B’s pursuit, Michelle suddenly uploaded photos of herself in a wedding dress on her Sina Weibo blog in October. The captions of the photo said, “If I were to fall in love, it’d have to be with you @BJ.L.”

With the mysterious man’s recent confession, fans speculated that Michelle’s BJ.L may be the wealthy Mr. B. 43 comments to Michelle Ye Receives Love Confession from Mr. B.