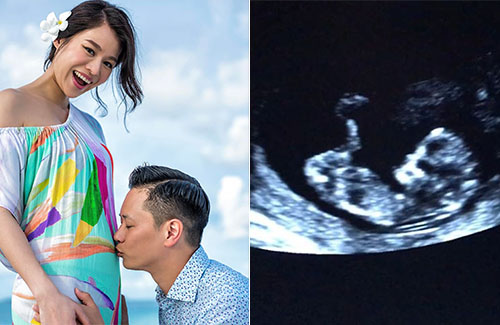 On Sunday, Mother’s Day, 37-year-old Myolie announced on her social media accounts that she is expecting her first child with husband, Philip Lee (李乘德). The former TVB actress shared a series of photos she took with Philip when they were vacationing in The Maldives. She also shared a sonogram of her baby on Instagram.

“Happy Mother’s Day to all mothers in the world (including me)!” wrote Myolie on Instagram. “We are so blessed to let you all know that Little Lee is on the way. Little baby Lee is already doing sit ups in my tummy, yes, Mummy and Daddy can’t wait to see you too!”

Myolie and Philip tied the knot after one year of dating in December 2015. According to news reports, Myolie is currently about four months pregnant. There are rumors that the baby is a boy. “We chose to announce it today after a long talk with my husband,” said Myolie in a phone interview. “We couldn’t talk about it before, because I didn’t reach my first trimester yet. Thank you all for your blessings!” (Boy or girl?) “My husband wants to wait a little longer before asking the doctor. We’re in no hurry.” (When are you due?) “You’ll know when it happens!”

The first few months of pregnancy had been quite difficult for Myolie. She had to cope with morning sickness and a loss of appetite. “I’d get cold flashes and nausea, but never vomited. I actually lost weight!”

Myolie’s close friends all rushed to congratulate the actress after her big announcement. Nancy Wu (胡定欣) said she had been keeping the pregnancy secret for a while, saying, “Her and her husband have always wanted to have children, and now they finally got their gift! I’m so happy for them.” (Will you be the godmother?) “Everyone’s fighting for it!”

As for whether or not Myolie’s baby is a boy or girl, Nancy said, “I’ll leave them to announce it. We’d keep it a secret for them.”

Elaine Yiu (姚子羚) said, “Myolie surprised us with a sonogram with the baby! We’re all prepared to be the baby’s godmother, but Paisley Wu (胡蓓蔚) has to take on that role!” Paisley said, “I’m so happy for the couple. I’m the big godmother now!” Selena Lee (李施嬅) joked that she and the gang should take childrearing courses.

Mandy Wong (黃智雯) congratulated the couple, saying, “They’ve always wanted children.” (There are rumors that you’re getting married!) “This is a possibility. Some of us aren’t married, like Elaine and Nancy. They have a chance too.”