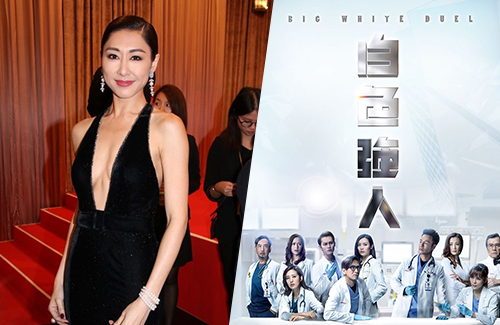 Nancy Wu (胡定欣) had been on a management limbo after completing 2018’s Justice Bao: The First Year <包青天再起風雲>, the last drama in her TVB contract. Nancy has since had talks with EEG and Louis Koo’s (古天樂) Sky High Entertainment, but sources are confirming today that Nancy has decided to return to TVB, renewing her contract for a set number of years. This decision was reportedly due to career stability.

Her first drama as a returning artiste will be the upcoming Big White Duel 2 <白色強人II>, costarring Roger Kwok (郭晉安), Kenneth Ma (馬國明), Natalie Tong (唐詩詠), and new cast member Moses Chan (陳豪). According to sources, Nancy will be playing a doctor, a first in her two-decade acting career.

“It’s definitely refreshing for me as I rarely play professional roles,” said Nancy in an interview. “I’ve been doing a lot of research and my knowledge in medicine has also improved.”

The script is currently still in the works, and Nancy does not have many information about her role yet. “In the meantime, I’ll focus on doing more homework,” she said. “I’ve been watching a lot of medical-related films.”

Rumor has it that Nancy’s new role will come in between Kenneth Ma and Natalie Tong’s relationship. Nancy laughed and said, “I’ll be waiting for more arrangements by the producer, but I’m sure he doesn’t want to break this couple apart!” Producer Marco Law (羅永賢) clarified in a later interview that Nancy’s new role will not be part of a love triangle, stressing that she will be playing “a cool doctor with personality.”

On collaborating with his ex-girlfriend, Kenneth said, “We’ve known each other for many years, and we are good friends. I’m hoping for a good script! This benefits everyone.”