One is a TVB actor and another is a well-known actress in television and film. Although they never collaborated, dating rumors don’t seem very far-fetched at all.

Since her debut in 2009, Chrissie Chau (周秀娜) has had only one known boyfriend—Taiwanese model Avis Chen (陳偉成), who she broke up with in 2013. For a period of time Chrissie was rumored to be seeing producer Charlie Wong (黃永峰), who is a married man, but Chrissie has maintained that she is single.

But not for long—according to the Hong Kong media today, 34-year-old Chrissie has been secretly seeing 30-year-old Dickson Yu (余德丞), best known for playing “Ocean” in the 2017 TVB drama My Ages Apart <誇時代>. 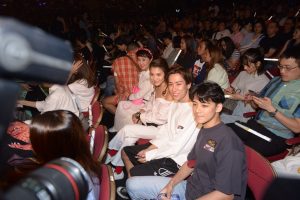 The alleged couple never collaborated before, but the duo have mutual friends. Last week, they were spotted at Joey Yung’s (容祖兒) concert with Mayao Ma (馬天佑) sitting between them. Chrissie and Dickson also reportedly live in the same neighborhood, and they were last seen watching a movie together. According to reports, Dickson drove Chrissie home that night.

Once a member of the Hong Kong national swimming team, Dickson debuted as a television sports presenter in 2013. In 2017, he debuted as an actor through 2017’s My Ages Apart, which shot him to fame. He’s had dating rumors with several TVB starlets, including Tiffany Lau (劉穎鏇), Louisa Mak (麥明詩), and Jeannie Chan (陳瀅), but none were proven to be substantial. He is very close friends with Sisley Choi (蔡思貝)—she was one of the first people who visited him when he was hospitalized in the ICU last August.