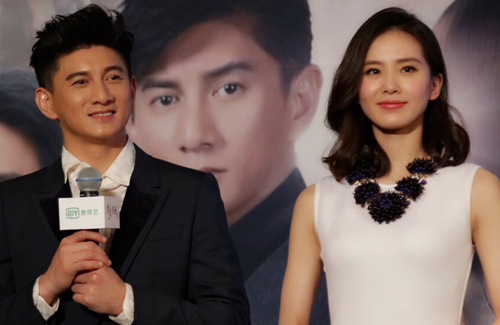 Although the broadcast of Bu Bu Jing Qing <步步惊情> was highly anticipated, the Mainland drama received poor reviews since its premiere last week. The series featured the return of the majority of Bu Bu Jing Xin‘s <步步惊心> popular cast, including real-life couple Nicky Wu (吴奇隆) and Cecilia Liu (劉詩詩).  Nicky appeared unbothered by the criticism and urged viewers to keep watching the drama.

The sequel takes place in modern day times, with the convenient plot device of the time-traveling Zhang Xiao (Cecilia Liu) forgetting her past palace romance with Fourth Prince (Nicky Wu). Since it aired, the drama is criticized for its illogically confusing plot and slow pace. Furthermore, netizens pointed out the actors’ lip movements did not match their speech and blamed it on poor editing skills.

Nicky explained, “An actor’s job is to perform and we do our best with the provided script. But I did find some adjustments in the released production, including how some parts were re-dubbed. The final decision regarding our dramas are not in the hands of any production company, since things are done according to certain policies. I’m not entirely sure of what happened in between, but at least I know it wasn’t like that when we filmed.”

Comparing his characters in the two installments, Nicky admitted Yin Zheng in the sequel is a more relaxing portrayal than Fourth Prince. Lacking the tense atmosphere of the Qing dynasty palace, he could release his emotions freely. Although it was his portrayal of Fourth Prince that propelled his popularity to its current level, Nicky expressed he will not limit himself to similar roles. In fact, he turned down more than ten Qing dynasty dramas in order to sample new experiences.

The plot of Palace 3: The Lost Daughter <宫锁连城> is currently moving forward at a quick pace and attracting high viewership ratings, opposite of Bu Bu Jing Qing. However, Nicky is unafraid of comparison and stated ratings are unpredictable. “No one knows how things will change tomorrow. And honestly, the ratings are quite strange. According to published statistics, there should be no one out on the streets and everyone should be watching TV at home. I don’t really understand it either.”

Earlier, reporters caught actor Wen Zhang (文章) cheating on his wife Ma Yili (马伊琍) in a secret affair with Yao Di (姚笛). Several comments surfaced online questioning the limits that should be set in terms of reporters’ duties. Since Nicky’s relationship with costar Cecilia Liu (刘诗诗) was also exposed after photographs emerged, he was asked to comment on the limits of reporters. Nicky admitted feeling helpless, “We are artistes, and I have nothing to say if you want to take photos of me. Even when I go to the washroom, someone would snap a photo and run off. If I yell at them, people would criticize my attitude. That’s why I’m fine with taking photos, but just don’t make things up.”

Once Nicky’s relationship with Cecilia had been publicized, the two have been bombarded with questions regarding marriage and baby plans. The couple is currently speculated to be living together, as Cecilia was spotted leaving Nicky’s home at odd hours. Nicky expressed the media has been too persistent, and believes many things in life require time to carefully think through.