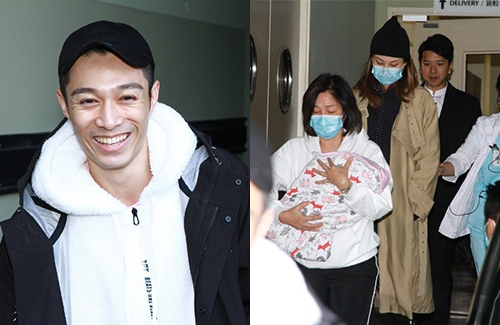 Today, at approximately 30 minutes after noon, Pakho Chau (周柏豪) arrived at the hospital to pick up his wife and daughter, who was born on December 4, 2019. He quietly greeted the press after visiting his family and formally thanked them for their patience and blessings.

Asking if he has changed his daughter’s diapers yet, the 35-year-old new father said proudly, “I have. Three times already! It was a success. It was good.” Although his daughter has no name yet, the family affectionately calls her “baby girl” (囡囡). Pakho will consult family elders when it comes to naming his daughters.

Pakho shared that he will not be going into work for the remainder of the week, but not be on break for long. “I have to start earning that milk money!” he said with a laugh. “Although we do get sponsors, we can’t slow down.” As for whether or not he would cut down his overseas jobs to stay in Hong Kong for his daughter, he said, “It depends. Right now, my priority is to take care of them two.”

Pakho and his wife, non-celebrity Stephanie, have been married for over three years. While she did not meet the press, she was seen exiting the hospital while Pakho was chatting with reporters. Stephanie wore a black beanie, tan trench coat, and covered her face with a mask. Pakho’s mother carried the baby.

Pakho Chau is a New Father