Two years since his last TVB drama, Pakho Chau (周柏豪) takes on a new challenging role as a serial killer in upcoming thriller drama Bystander <旁觀者>. Unlike Pakho’s his past roles, the character is much darker as he is unfazed by murder and body dismemberment.

While filming for the new drama has started last week, the 36-year-old actor/ singer is not entirely clear on the direction it will take. “I believe the drama will not focus on the violence, but my expressions will be scary.” As this is the first time he is playing a killer with a split personality, Pakho will be able to experience the thrills of acting out a character that is a far cry from his own life experiences.

The story revolves around police officer Yu (Venus Wong) who has a special sensitivity to her surroundings and people’s emotions, which enable her to solve many difficult crimes. Meeting shop owner Hei (Pakho Chau), Yu is drawn to his pleasant disposition and his ability to ease her tensions during investigations. At this time, two mysterious murders occur. As Yu digs deeper into the investigations, she starts to sense the murderer’s heart and gets closer to him. Will she be able to suppress her conflicted emotions and arrest him when his identity is unveiled?

Aside from their cat and mouse chase, Pakho and Venus will share many romantic scenes in Bystander. “I haven’t filmed anything since Wonder Woman <多功能老婆> and I had gained weight.  I lost nine pounds in a week and banned carbs from my diet. After I found out my co-star is Venus, I had a lot of pressure. Right now, we are competing to see who eats healthier,” Pakho revealed.

Making an appearance in the drama, Mark and Hero teased that they will become victims under Pakho’s hand. The two quipped that the drama’s small budget could only afford to provide a small car for the murder scene, and they felt cramped when Pakho’s character stuffed their bodies into the vehicle.

Although additional details of Bystander have not been revealed yet, many netizens already see similarities to South Korean vigilante drama Mouse which starred Lee Seung Gi. However, many are curious by TVB’s attempt to produce a drama with a darker theme and also excited to see Pakho cast in a complex role. 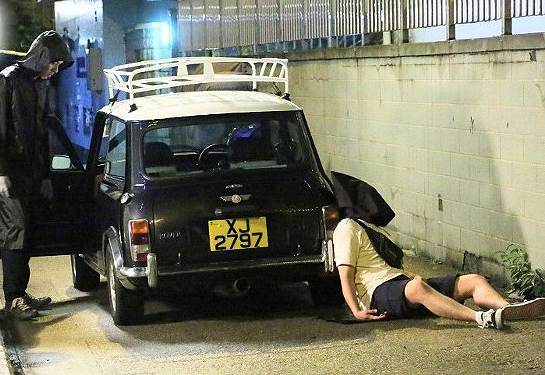