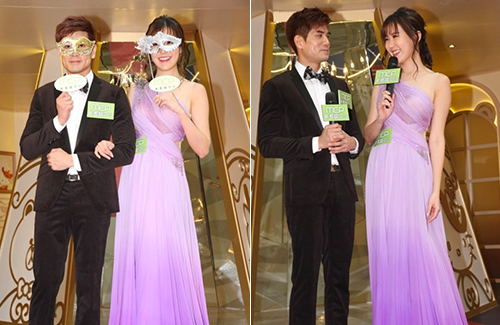 Philip Ng (伍允龍) and Moon Lau (劉佩玥) attended their first event together after breaking out in the summer’s hit television drama, A Fist Within Four Walls <城寨英雄>. The rumored couple appeared in evening attire, with Philip wearing a brown suede suit and Moon wearing a light purple gown.

The duo were glued to each other throughout the event. Philip stayed by Moon’s side wherever she went, acting like her bodyguard. The organizers joked that it looked like Philip and Moon were at their own wedding.

Remarking that the rumored couple were probably hired at a high price, Moon said, “I’m happy with it. I’m happy if there’s work. It’s even better that I get to work with my old partner and friend.” (Will you guys celebrate Christmas together?) “I’ve been thinking about hosting a party.” (For the both of you?) “If it’s just two people then it’s not called a party anymore. We do have mutual friends. I’m thinking about who to invite.” (Will you invite Philip?) “Of course.”

Philip said, “This is my first couple appearance with Moon. Because of work it’s been a while since we last got together. I’m happy that we can hang out. This is my second time meeting her after coming back to Hong Kong. The first time was in the streets. I was wondering why the girl really looked like Moon with her [mouth] mask!”

Asking if Philip has seen Moon’s intimate scenes with Bosco Wong (黃宗澤) in the television drama Two Steps from Heaven <幕後玩家>, Philip said, “I’m too scared to watch it.” (Why? Jealous?) “I’m too scared that she did too well in the scene. I didn’t see it but I’m sure she was great. Besides, how do you approach those scenes anyways?”