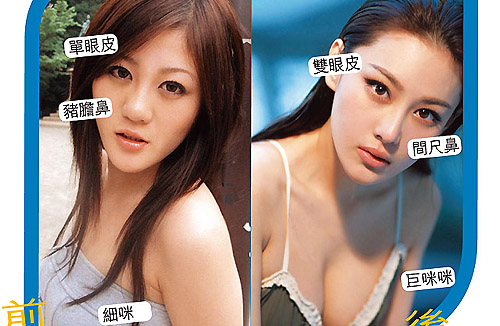 Recently,  a group of fans scolded Viann severely on Weibo. Normally refusing to admit his dating status, Ron uncharacteristically silenced his fans while protecting his girlfriend! However, Viann was concerned that Ron’s heart cannot be leashed. Viann wrote on her blog earlier, “God bless sausage sister to leave my sight.” Viann’s statement alluded that sausage-lipped Kate was competing with her for Ron. Of course Viann had to kick the third party away!

Twenty-two-year-old, Viann Zhang’s original name was Zhang Yan (張燕). As a model, she posed for numerous sexy photos. With her 35F figure, Viann was China’s “Soccer  Babe” in 2009 and appeared in mainland online game <赤壁銅雀台>. While filming Pretty Maid <大丫鬟> in 2009 in China, Ron met Viann at a nightclub and started dating secretly.

Netizens unearthed old photos of Viann prior to plastic surgery. Comparing the before and after photos, the changes were drastic and even resembled different women!

Jayne: A stunning transformation. Only Viann’s eyes remained after the plastic surgery procedures. I don’t really see any trace of her old self!