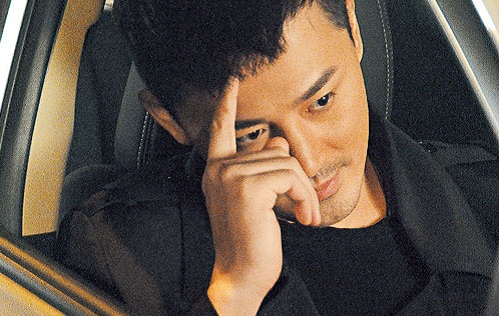 After receiving the Jade Solid Golid “Golden Melody Gold Award” for his song, Chok, in early January, Raymond Lam (林峯) became the object of severe criticism. Despite this, Raymond remained the #1 Brother at TVB. In his new series, Fight Crime <雷霆掃毒>, Raymond will sport an unshaven appearance to fit his rough cop role.

Despite growing a beard for two weeks, Raymond only had a bit of facial hair growth above his upper lip. In addition, Raymond had to exercise at the gym daily to a achieve a better body for his role in Fight Crime. Last week, while filming in an outdoor scene, Fight Crime producer, Lam Chi Wah (林志華), who requested that more hair growth was necessitated. However, Raymond replied, “I’m afraid it would get dirty!” Producer Lam immediately let the issue go, “Then that’s okay!” Afterward, Raymond revealed, “The producer asked me to grow out my beard longer, but the facial hair on the sides of my jaw are not dense! I can’t help it!”

In Fight Crime, Michael Miu (苗僑偉) will portray the main villain. The female lead will be Elaine Ng (吳綺莉). Kate Tsui (徐子珊) and Ella Koon (官恩娜) will fight over Raymond’s love. The cast was appealing and the production may even turn out to be this year’s Anniversary series! Ella will portray Raymond Lam’s subordinate; the pair will be involved in a romantic arc. To fit her policewoman role, Ella wore neutral makeup, risking the possibility that she may appear tired in the HD footage.

Since 32-year-old Raymond Lam entered the entertainment industry, he has always possessed a handsome, idol image in series such as Moonlight Resonance <溏心風暴之家好月圓> and Men With No Shadows <不速之約.  In each drama, Raymond retained his handsome, well-kept image. It was not until Fight Crime in which Raymond was requested to grow a beard in order to fit his rough character. For Raymond, this may be considered a breakthrough.

Many actors were eager to look their best onscreem. When asked to risk their handsome images, many actors wavered. Aside from Raymond refusing to grow a full beard, the below actors put their looks first and did not comply with the directors’ requests:

Director Wong Kar Wai (王家衞) requested Leon Lai (黎明) to wear sandals in Fallen Angels <墮落天使>. However, Leon refused to reveal his toes  because he considered them to be unattractive.

Famous for cooperating with any filming requirements, Andy Lau (劉德華) however refused to shave his head bald in 2006 film, The Warlords <投名狀>. Andy told Director Peter Chan (陳可辛) that given the context that the characters were tangled in war, there should be no time to shave their heads. Finally, Andy sported a skinhead look in his role. Jayne: Raymond looks very masculine with a bit of facial hair. The current length looks best, actually very stylish. If it were any longer, it would look unkept and unruly, which is why Raymond protested in growing it out further.