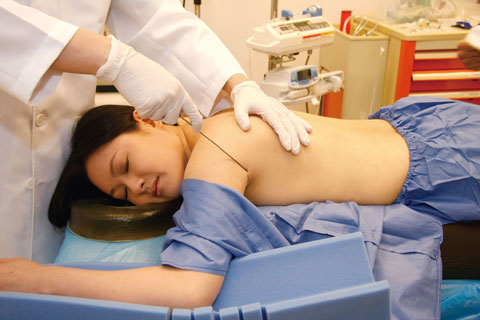 Recently, Rachel became the beauty spokesperson for “Banyan Tree” for a seven figure sum.  As part of the endorsement deal, Rachel will be undergoing significant plastic surgery to regain her former bombshell figure.  Rachel will receive major liposuction for her arms, back, abdomen, and waist areas. Liposuction removes excess fat deposits and aside from slimming the body, it also improves the body’s contours.

After administering anesthesia, the plastic surgeon will perform the liposuction procedures on the unconscious Rachel. Confident about the procedure, Rachel was photographed smiling while awaiting the forthcoming liposuction.

Rachel started her film career in the 1980’s at the age of fifteen and played mainly supporting roles. In the mid 1990’s, she gained notoriety when she released two nude pictorials and starred in a trio of Category III films.  She married composer, Clarence Hui Yuen, and the pair divorced shortly after their daughter was born.

In 2004, Rachel was  involved in a notorious love triangle with her former hairstylist, Jacky Ma, and his wife.  The lurid details of the threesome’s trysts were published in a saucy book written by Mrs. Ma. Allegedly at the time, Rachel was emotionally unstable.

Rachel’s acting career rose to a new peak after she won a Golden Horse award in 1999 for her performance in Ann Hui’s “Ordinary Heroes.” She was last romantically linked with lyricist, Calvin Poon.

Compiled from the Sun and dailychilli.com

Jayne: Rachel’s lurid involvement with Jacky Ma and his wife was tabloid fodder for many months. One of the most bizarre affairs in the Hong Kong entertainment industry. And the man was ugly too!

Rachel’s exposed back does not look fat at all. Nothing a little exercise wouldn’t burn off. She’s probably undergoing liposuction because of the money. Her smile is stiff in the first photo.