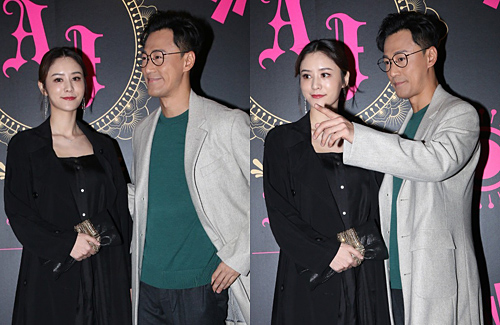 The couple has a taste of their own upcoming wedding.

TVB actor Joel Chan’s (陳山聰) wedding with long-time girlfriend Apple was attended by many big-name artistes including Charmaine Sheh (佘詩曼) and Eric Tsang (曾志偉). The appearance of Raymond Lam (林峰) with his soon-to-be wife Carina Zhang (張馨月) at the wedding raised a brouhaha, as it was the first time the two were seen together in public since their marriage plans were announced.

Always close by Carina’s side that night, Raymond was a gentleman the whole time, protecting Carina by drinking in her place and teaching her how best to pose for the camera. In addition to being spotted with a rounder face than before, Carina was also seen wearing a loose-fitting black dress and using her clutch to cover her tummy, which led Hong Kong media to speculate that she may be pregnant.

Besides his own age, part of the reason why 40-year-old Raymond decided to marry was due to pressure from his father, businessman Lam Wah Kwok (林華國). Carina gets along very well with Raymond’s parents, withdrawing from the  modelling limelight ever since she became recognized as ‘Raymond’s significant other, to make preparations for carrying on the Lams’ family line.

On Carina’s birthday in September, Raymond had sent a loving greeting to his girlfriend on Weibo in which he addressed Carina as “Pig baby”, to which she replied “As per your prosperous greeting”. Though they can’t conceive a baby born in the year of the pig, one born in the Year of the Rat is still likely – Carina has already moved to their love nest in Woodbury Court residence at Poh Fu Lam Road, on which Raymond spent a generous $60 million HKD to perfect.

What she lost out to Raymond’s ex-girlfriend Karena Lam (吳千語)  in terms of educational qualifications, Carina has more than made up with her mature personality and obedient traits, in addition to possessing a 34D figure.

On the other end, Karena too is enjoying a blossoming romance, having gotten back together with rich third generation Brian Shi (施伯雄) after splitting up earlier.