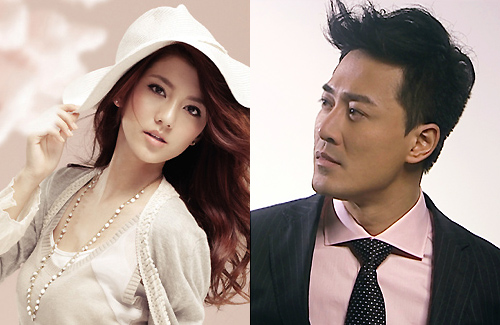 Raymond Lam (林峯) and girlfriend, Karena Ng (吳千語), have been on an extended “honeyoon”, taking 3 vacations in one month! The added privacy allowed the couple’s relationship to grow by leaps and bounds, as signified by a “commitment” ring found on Karena’s finger.

After Lunar New Year, Raymond cleared his work calendar, even turning down some film offers and promotional events, to spend time with Karena. After Tokyo and Okinawa, the couple recently traveled to Milan, Italy to escape the intrusive Hong Kong paparazzi and soak in the international sights.

On the morning of February 28, Raymond and Karena arrived at the Hong Kong International Airport after their Milan trip. The couple appeared at the arrival hall separately. Raymond was seen pushing 3 large suitcases. He smiled at the press, but declined to accept interviews. “I’m on vacation now; there’s no need to give you a daily schedule of activities!” Raymond said before he stepped away.

Ten minutes later, Karena emerged. Karena was asked if she and Raymond had slept in separate rooms in Milan. Although she refused to respond, it was observed that Karena wore a ring on her finger; was it a token of Raymond’s love commitment?

At an evening film celebratory event, Karena was once again asked about her sleeping arrangements while traveling in Milan. “Let’s not talk about such private matters,” Karena said and clarified that the ring she was wearing was purchased by herself.

Karena further explained why she and Raymond went on multiple trips. “We went on 3 trips within one month because there were work assignments interspersed throughout. The trips earlier were too short. I had filmed a drama for 3 months and wished to take a long vacation. There were friends accompanying us.”

Spending an extended period of time together, Raymond and Karena’s relationship only improved. “He’s very attentive. I understood a lot more about him after the trip. He normally has a habit of being late, so I reminded him.”

Karena also said that she will not become pregnant before marriage, a milestone in life which requires careful planning.

Since Raymond has been on vacation, he has been unable to join the cast of Saving General Yang <忠烈楊家將> in its Taiwan promotional tour this week. Producer Raymond Wong (黃百鳴), who had signed Karena under his management company, did not seem to mind the couple taking a long break, as long as they knew when to prioritize work, while dating in their leisure time.

Following Love is…Pyjamas <男人如衣服>, in which they met and fell in love, Raymond and Karena will once again appear together in new horror film Baby Blues 3D <詭眼3D>, which is scheduled to open summer 2013.

Note: This article was updated on February 28, 2013 at 4:49 PM after additional details emerged in the evening news edition.